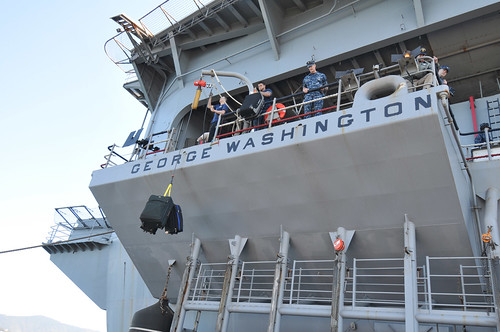 George Washington's return to Sasebo is for the continued transfer of personnel and supplies and to allow Sailors a chance for relaxation after three weeks at sea.

While more than 150 Puget Sound and Norfolk Naval Shipyard workers will be departing, 115 Japanese workers will be coming aboard George Washington to continue the ship's routine maintenance at sea.

Since George Washington departed its homeport March 21, more than 600 maintenance jobs have been complete to include lagging, chill water piping, restoration of laundry facilities and the instillation of a new 4,000-lb. fuel purifier. The work being done in local waters off Japan's coast ensures George Washington will be ready to respond to any operational tasking.

Many George Washington Sailors are looking forward to going ashore and to some much-needed time off and travel, which are being organized by the ship's Morale, Welfare and Recreation (MWR) Department.

"We're offering a lot of tours such as the Pearl Sea Resort where you can cook your own oysters, see different animals and even get on a cruise," said Rebekah Mckoy, George Washington's MWR director. "I'm excited because the crew has been working hard and it's a good break."

"I can finally get off the boat and enjoy some time off," said Aviation Ordnanceman 3rd Class Ezra Brabham from Long Island, N.Y. "We've been out to sea for a while, so I'm really looking forward to taking it easy."

Other tours from MWR include a visit to Nagasaki; paintball at Sakibe Field; a sunset hike up Kunimi Peak to the hot springs; Shirihama saltwater fishing, and shopping trips to the pottery towns of Imari and Arita.

"I already signed up for the shopping tour," said Brabham. "Another reason I can't wait to finally get back on land, it's time again to start spending some cash."

"So far the tickets are already starting to sell but there's still plenty of spots open for more sign-ups," said Mckoy. "There's something for everyone, so I would like to encourage Sailors to reward themselves for their hard work."

"The projects consist of going to the Kusuzumi Day Care Center and Sakura Challenged Home for Handicapped Children," said Religious Programs Specialist 1st Class Nino Miranda, of Riverside, Calif., and CRMD's leading petty officer. "It'll be one hour of cleaning and then one hour of playing with the kids. I would like to see as many Sailors as possible out there helping the community and creating a positive outlook because these kids are the future and they will remember us."

George Washington is the Navy's only permanently forward-deployed aircraft carrier, ensuring security and stability across the western Pacific Ocean.