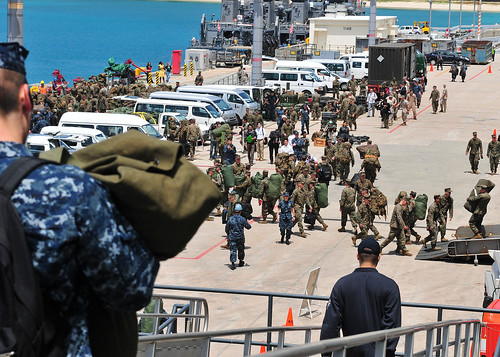 Marines assigned to Essex combat cargo department coordinated the offload of more than 1,200 fellow Marines, 75 vehicles and 300 pieces of cargo. While an offload of this scope typically takes two to three days, the Marines finished it in only one, using the ship’s well deck and pier-side-ramps simultaneously.

“We were able to successfully complete the offload very quickly and efficiently in just one day,” said Gunnery Sgt. Enrique Perez, combat cargo well deck assistant. “More importantly, we were able to do it safely. When you’re moving so many pieces in such a short period of time, it requires a lot of focus and attention to detail to make sure there are no mishaps. Safety is always our primary concern and we were once again able to conduct a safe offload.”

During the offload, the MEU coordinated with Assault Craft Unit One, which provided landing craft utility vehicles to move troops, equipment and cargo ashore.

“Their landing craft were really an essential element to the success of the offload,” said Perez. “It allowed us to move equipment from the well deck and off the pier at the same time. Without that, we couldn't have moved some of the larger vehicles off the ship.”

For many 31st MEU Marines, the offload marked the end of their first deployment at sea. It provided an opportunity to diversify their skill set through training, as well as gain real-world experience during Operation Tomodachi, said Lance Cpl. Terrell Johnson, after his first deployment aboard a Navy ship.

“This was definitely a different experience for a lot of us,” said Johnson. “The deployment was long and challenging, but having the chance to do the things that we did when helping out after the earthquake and tsunami is something I’ll never forget.”

Essex and the 31st MEU spent nearly three weeks operating off the coast of northeastern Japan in support of Operation Tomodachi. During the relief efforts, they delivered more than 166,000 pounds of relief supplies and participated in numerous projects to clean debris in areas affected by the March 11th earthquake and tsunami.

In addition, the MEU participated in various multi-national exercises designed to enhance interoperability between U.S. forces and partner nations throughout the Western Pacific, including Cobra Gold 2011 and Cambodian Maritime Exercise 2011.

Essex, commanded by Capt. David Fluker, is part of the forward-deployed Essex Amphibious Ready Group and is underway in the Western Pacific.