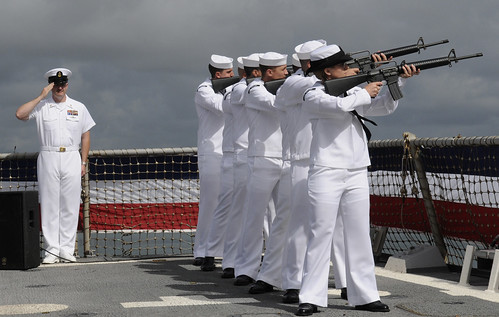 PEARL HARBOR (NNS) - The crew of the guided-missile destroyer USS Chung-Hoon (DDG 93) and members of the Navy League Honolulu Council (NLHC) honored Sailors of the destroyer USS Sigsbee in a ceremony aboard Chung-Hoon's flight deck, April 14.

The ceremony was held to pay respects to the 23 Sailors whose lives were lost when a kamikaze suicide plane struck the ship on April 14, 1945 during the Battle of Okinawa.

"Today we are here to honor and remember the remarkable men who lost their lives aboard USS Sigsbee on April 14, 1945, while the ship was engaged in combat operations off the coast of Okinawa," said Cmdr. Stephen Erb, commanding officer of Chung-Hoon.

Chung-Hoon's Ceremonial Guard conducted a 21-gun salute while a U.S. Air Force bugler played taps and Sailors dropped flower petals off the side of the ship into the water to pay tribute to the perished Sigsbee Sailors.

In command of the ship at the time of the attack was Rear Adm. - then Cmdr. - Gordon Pai'ea Chung-Hoon. The attack knocked the ship's port engine and steering control out of commission and caused the starboard engine to be capable of running at only five knots.

Sigsbee was later towed out of the war zone to Guam where she was sufficiently repaired to be towed back to Pearl Harbor. The ship was decommissioned on March 31, 1947 in Charleston, S.C.

During the ceremony, Erb spoke about the strong ties that Chung-Hoon and Sigsbee have.

"The Sailors that served aboard Sigsbee in 1945 are no different than you or I. We have visited many of the same islands and sailed the same routes as our shipmates," Erb said. "I could think of no more fitting place to commemorate the attack on Sigsbee than here in Pearl Harbor where Sigsbee was homeported, and where Rear Adm. Chung-Hoon was born."

USS Chung-Hoon was named in honor of Rear Adm. Gordon Pai'ea Chung-Hoon. Chung-Hoon is a recipient of the Navy Cross and Silver Star for conspicuous gallantry and extraordinary heroism as commanding officer of Sigsbee from May 1944 to October 1945. Chung-Hoon was also a Pearl Harbor survivor, assigned to the battleship USS Arizona during the Dec. 7, 1941 attack on Pearl Harbor.

The NLHC 'adopted' Chung-Hoon during a ceremony in 2009 to formally recognize the partnership between Chung-Hoon and NLHC.