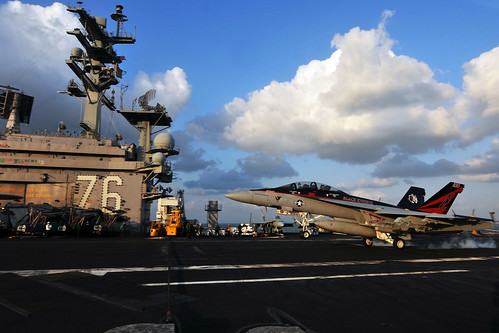 Capt. Kevin "Nix" Mannix tallied his 1,000th arrested landing with the trap of his F/A-18F Super Hornet from the "Black Knights" of Strike Fighter Squadron (VFA) 154 on the flight deck of the Ronald Reagan.

"One thousand traps is a milestone in naval aviation," Mannix said. "It just shows I've been around naval aviation a long time. Naval aviation is an unforgiving environment that demands your best every day."

Mannix joins the ranks of the '1,000 Trap Club', and his name will appear on a special plaque at the Naval Aviation Museum in Pensacola, Fla., where those who have reached this significant accomplishment are honored.

"Today's milestone is a tribute to his airmanship and professionalism," said Capt. Hamlin Ortiz-Marty, Commander, Carrier Air Wing (CVW) 14. "He's achieved a goal that others can only dream of reaching in today's Navy."

Mannix attributed his career achievement to the hard work of the Sailors who helped him over the years.

"It's so surreal," Mannix said. "It seems like just yesterday I started this adventure in naval aviation. I love what I do."

Ronald Reagan departed from its homeport in San Diego Feb. 2, for a training exercise and its deployment to the 7th Fleet area of responsibility. Ronald Regan's last deployment to 7th Fleet was in 2009.