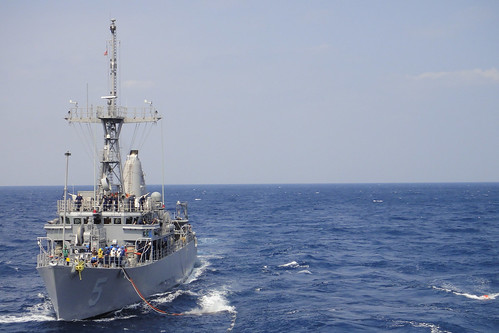 During this visit, Guardian helped dedicate a new school house, built by Navy Seabees, and trained with the Timorese navy in areas such as damage control, navigation, engineering, and seamanship. Guardian is one of only a few U.S. warships to visit this island nation since it earned its independence in 2002, and the first U.S. minesweeper to ever visit.

“It is an absolute honor to work alongside individuals who strive to improve their quality of life everyday. There is no doubt that they will rapidly improve the effectiveness of their navy,” said Guardian’s Commanding Officer, Lt. Cmdr. Ken Brown.

After the dedication of the new school, Guardian crewmembers went to Port Hera where Americans were honored with a flag raising ceremony. The base played the U.S. national anthem and raised the American flag for the first time in Timor Leste history. Following events ashore, Brown invited Major General Taur Matan Ruak, Commander Defense Force Timor Leste; and Captain Pedro Klamar Fuik, Commander Naval Component Timor Leste, aboard Guardian for a tour of the small, but capable ship.

Brown and his crew will continue to train and participate in cultural exchanges with the Timorese Navy for several days before continuing on their patrol through out the western Pacific. Guardian is a part of Mine Countermeasure Squadron 7, led by Capt. Dan Brune, and Commander, Task Force 76, led by Rear Adm. J. Scott Jones.