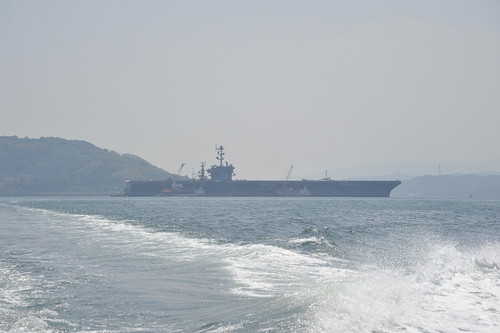 The nuclear-powered aircraft carrier was completing routine maintenance on March 11 when the earthquake and tsunami struck northern Honshu. The ship departed Fleet Activities Yokosuka on March 21 with 466 civilian contractors and shipyard workers embarked, who continued to conduct scheduled maintenance while the ship operated in waters near the Japanese islands of Shikoku and Kyushu.

USS George Washington departed from Yokosuka to ensure that the ship could maintain readiness, and workers could continue work required to support the U.S.-Japan alliance.

The situation in Japan has improved since the departure of George Washington. In its updated travel advisory for Japan on April 14, the U.S. Department of State noted that “the situation at the [Fukushima] plant is dramatically different today than it was on March 16, when we saw significant ongoing releases of radioactivity, the loss of effective means to cool the reactor cores and spent fuel, the absence of outside power or fresh water supply for emergency management, and considerable uncertainty about the condition of the site. Today, while the situation remains serious, and there is still a possibility of unanticipated developments, cooling efforts are ongoing and successful, power, water supply, and back-up services have been partially or fully restored, and planning has begun to control radioactive contamination and mitigate future dangers. Our coordination with the Japanese is regular and productive, and we have a greatly increased capacity to measure and analyze risks.”

USS George Washington made two visits to Sasebo while it was away from Yokosuka, on April 5 and April 12-14, in order to exchange shipyard personnel as well as components and equipment to support the routine maintenance. Throughout this time, the U.S. Navy has maintained a strong desire and every intention to return to George Washington to its homeport at Yokosuka.

Upon returning to Yokosuka, George Washington will continue its maintenance, while maintaining a heightened state of readiness to return to sea if necessary. The Navy remains committed to completing George Washington’s routine maintenance so that it can fully meet the obligation of the U.S. government to defend Japan and support peace and stability in the region.