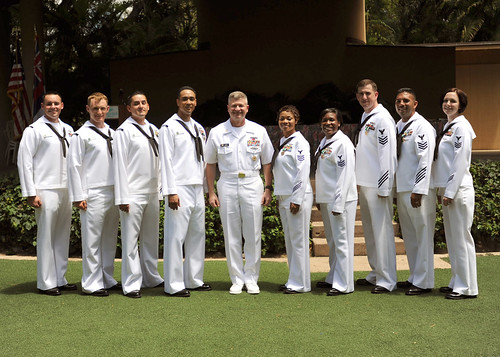 Rear Adm Timothy M. Giardina, U.S. Pacific Fleet's deputy commander, and Pacific Fleet Master Chief (SW/AW) John Minyard announced the selection of Jenkins, the Sea Sailor of the Year, and Pashkevich, the Shore Sailor the Year, from among a group of nine finalists.

"Sailor of the Year finalists are some of the best Sailors in our Navy," said Minyard. "They go through a tremendous amount of work and process to get to this level. Their dedication and service is second to none."

Representing Marine Corps Forces Pacific and serving with 1st Battalion, 3rd Marines, Jenkins will be meritoriously promoted to chief petty officer in the summer. "It's an incredible accomplishment. When I found out I was selected I was really, really surprised. I am the most junior guy," Jenkins said. "Accepting this award is really humbling because there are so many great heroes and warriors in the Navy today."

Pashkevich represents Commander, U.S. Third Fleet and is assigned to Tactical Training Group Pacific. She will travel to Washington, D.C. to represent Pacific Fleet at the Chief of Naval Operations Shore Sailor of the Year Competition. If selected, she too will be meritoriously promoted to chief petty officer.

Master Chief Petty Officer of the Navy (MCPON) Rick D. West addressed the crowd and took time to thank the spouses and families whose support enabled their Sailors to excel. "Without you, these Sailors wouldn't be able to be the best that we see here today," he said.

West noted the difficult paths each nominee weathered to reach this stage.

"Some of these folks came through different levels (of competition) to get here. For some of them it was four, five maybe six; some more. They represent the best and they do it well."

However difficult the path, both West and Minyard noted those selected worked tirelessly to go above and beyond the norm.

"It's not about winning awards or titles; it's about doing the right thing. Working hard and dedicating yourself to a cause that's higher then yourself," said Minyard.

Nominees spent the week leading up the luncheon and ceremony learning about Naval history and heritage with a visit to the USS Arizona Memorial and Battleship Missouri and spent time learning from each other.

"While we recognize a few Sailors today, all Sailors are very valuable to our organization and they should be proud of their service today," said Minyard.