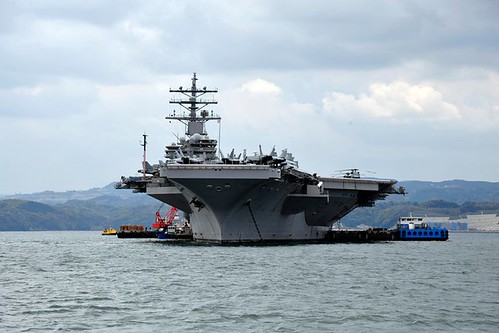 The ships of the Ronald Reagan CSG were the first to arrive and begin HADR operations after a magnitude 9.0 earthquake and ensuing tsunami struck off the coast of northern Japan March 11.

"It was a privilege to be part of Operation Tomodachi. We were glad to be able to help those in need," said Capt. Thom Burke, Ronald Reagan's commanding officer. "We are excited for the opportunity to visit this beautiful country."

While in Sasebo, Sailors will participate in community service (COMSERV) projects and have opportunities to experience the local culture through tours offered through Morale, Welfare and Recreation (MWR).

Ronald Reagan departed from its homeport in San Diego Feb. 2, for a training exercise and its deployment to the 7th area of responsibility. Ronald Regan's last deployment to 7th Fleet was in 2009.