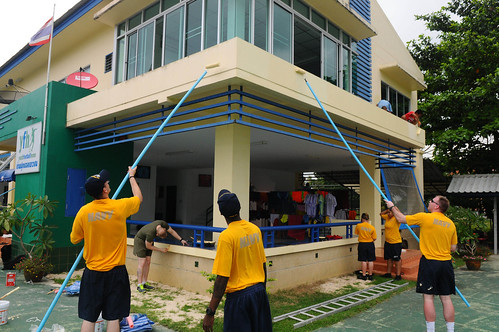 Hundreds of crew members volunteered by interacting with local citizens as they helped paint, garden, build and even play games with the people of Thailand.

"The Navy makes great ambassadors," said Brad Kenny, Rotary Club of Patong Beach Service Projects committee chairman. "I think the COMSERV program is a fantastic program. You are paying back the community, showing your goodwill and showing the world it's not just about defending freedom. You all go out and do wonderful things all around the world."

"It is really a surprise and joy for me to have the Navy here," said Janpong Chalerm, Baan Klong Sai School director. "You help the children, and they are very happy to see you."

"With the Navy here it gives the children a chance to open their eyes to the world," said Bob Windsor, Youth Football Home Foundation COMSERV organizer. "Even though they came from nothing or suffered tremendous hardships, it gives them a goal."

For the crew members who volunteered, the experience of giving back was both rewarding and meaningful.

"I like to give back to the community," said Aviation Boatswain's Mate (Fuel) 3rd Class Jessica Franklin. "I wanted to see the inside of Thailand because it's something not every Sailor sees. I like to be able to help and it feels good to see they are happy we're here."

"We're visitors in their country, and it's nice for people to see Americans doing good in the community," said Aviation Maintenance Administrationman Airman Joseph Dellera.

Carrier Strike Group 7 is operating in the 7th Fleet area of responsibility as part of a scheduled deployment.