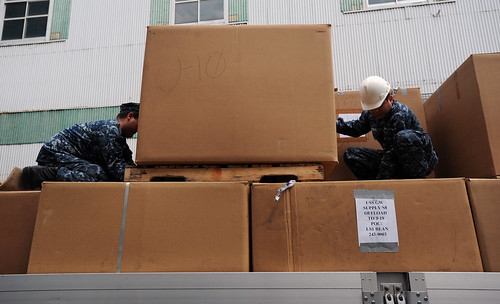 YOKOSUKA, Japan (May 10, 2011) Sailors aboard the aircraft carrier USS George Washington (CVN 73) place more than a dozen boxes of donated blankets onto a flatbed truck outside one of the ship's warehouses. The blankets, donated by George Washington Sailors and their families, were to be delivered to the areas of Japan hit hardest by the 9.0 magnitude earthquake and subsequent tsunami that struck the island nation March 11. (U.S. Navy photo by Mass Communication Specialist 3rd Class Adam K. Thomas)

YOKOSUKA, Japan — Sailors aboard the aircraft carrier USS George Washington (CVN 73) joined forces with members of the Free Masons of Japan to box up and ship out donated blankets to those in need May 10.

Sixteen pallets containing more than 1,500 blankets donated by George Washington Sailors, their families and various communities from across the United States were bound for Sendai, Japan to provide relief to victims of the 9.0 magnitude earthquake and subsequent tsunami that struck the island nation March 11.

The delivery to Sendai was spearheaded by Phil Ambrose, Grand Secretary of the Free Masons of Japan.

“The damage to the Sendai area is much worse than people have seen on television; the area has been totally devastated by the tsunami,” said Ambrose. “We’re taking several truckloads of supplies and these blankets to try and help people recover from the devastation.”

George Washington’s crew, wanting to do whatever they could to help the people of Japan, initiated a blanked drive in the ship’s hangar bay less than 48 hours after the earthquake and tsunami. The crew also reached out to their friends and family at home by posting a message on the ship’s Facebook page asking them to donate.

“I think it’s so important for human beings to help other human beings whenever there’s a need,” said Lt. Cmdr. Jose Pimentel, George Washington Catholic Chaplain. “The earthquake happened so unexpectedly. Life was just going along and suddenly there was this tremendous tragedy, so we all feel the need to help. It’s just human nature to want to help out and assist.”

As crates were quickly filling with blankets, George Washington and her crew were ordered to pull out to sea putting their efforts on hold. Two weeks into this unexpected deployment during a brief port visit to Sasebo, Japan, the ship received her first shipment of mail which included more than 1,000 blankets. One shipment alone, from the Lake Orion Police Department in Lake Orion, Mich., contained 425 blankets collected by school children from a nearby elementary school.

The response to the request for donations was so overwhelming that George Washington’s Sailors had a difficult time finding space to store all of the blankets while underway.

“This blanket drive started out as a really good idea that got a little complicated when the ship had to leave Japan for a then-undetermined period of time,” said Pimentel. “It was fortunate that we were able to contact [Ambrose] and work with him from all ends. It’s been a great effort from everybody involved, not just our Sailors and our families, but from people from two nations coming together to assist those devastated by this catastrophe, and it’s a great thing that we were able to complete this project under the circumstances.”

George Washington is the Navy’s only permanently forward-deployed aircraft carrier, ensuring security and stability across the western Pacific Ocean.