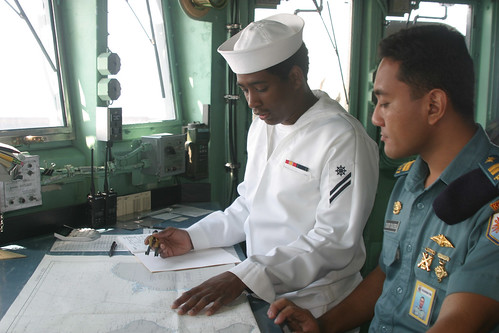 SURABAYA, Indonesia (May 9, 2011) Quartermaster Seaman Clay Saa makes plot markings on a chart on board USS Guardian (MCM 5) with Lt.j.g. Tato Taufiq of the Indonesian navy. Taufiq was one of two Indonesian ship riders who transited with Guardian from Bali to Surabaya. (U.S. Navy photo)

SURABAYA, Indonesia (NNS) — USS Guardian (MCM 5) arrived in Surabaya, Indonesia May 10, to continue a partnership mission with the nation's navy.

Guardian was welcomed by a traditional Indonesian dance and military marching band as the ship pulled into port.

During the ship's two-day transit to Surabaya, Guardian hosted two Indonesian junior officers; Lt. j.g. Tato Taufiq and Lt. j.g. Andri Priya. Both officers said they were happy to have the chance to work with the U.S. Navy.

"We're happy to have the American Navy in Surabaya and to be able to accompany Guardian in to port," said Priya.

The visit provided an opportunity for the two navies to share knowledge and increase their mine warfare planning capabilities.

Several Guardian crew members and a group of Indonesian mine warfare professionals also held discussions on different strategies and approaches to clearing the Tanjung Kodok waters off the shore of Indonesia. The area still contains mines that laid during World War II and have never been cleared.

Guardian is currently on routine patrol in the 7th Fleet area of responsibility.