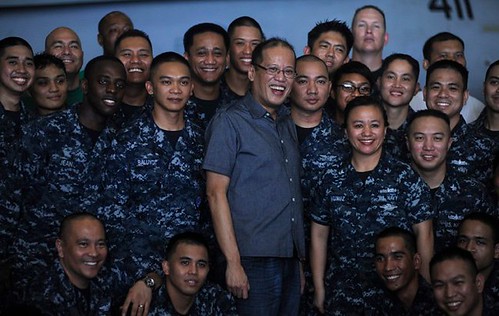 Aquino greeted Vinson Sailors as he toured the bridge, flight deck control, and pri-fly areas. Over one hundred Filipino Sailors gathered in Vinson’s Hangar Bay 2 to meet Aquino and take a group photo with the president.

“It is very exciting to visit the Carl Vinson,” said Aquino. “We are very proud, and because of what you do here, we have peace and stability to make progress in our country.”

Following Aquino’s remarks, the Sailors surrounded him to shake his hand and take personal photos.

Senior Chief Personnel Specialist (SW/AW) Raymond Gloria, born in the Philippines, explained the importance of Aquino’s visit to the ship.

“It’s a once-in-a-lifetime chance to meet the president. His family is well-known, and they have made a lot of changes,” said Gloria. “Most of the people out here have left their homeland for one reason or another. Being recognized by the president of their homeland of birth or nationality, they know they’re welcome.”

Logistics Specialist 3rd Class Jourdan Borcena, a San Diego native, will be making his second trip to the Philippines, where he is meeting up with his parents.

“I didn’t expect the president. I thought there would just be some military personnel, and I was pretty surprised. It brings a lot of morale since there’s such a large number of Filipinos on board,” said Borcena.

“It’s an honor to have the president visit our Sailors. My father was in the Navy, and he took me as a young boy to visit the Philippines. It’s great to come back,” said Vinson’s Commanding Officer Capt. Bruce Lindsey. “The strength of the ship are the Sailors, and whether Philippine or U.S., Sailors are one and the same.”