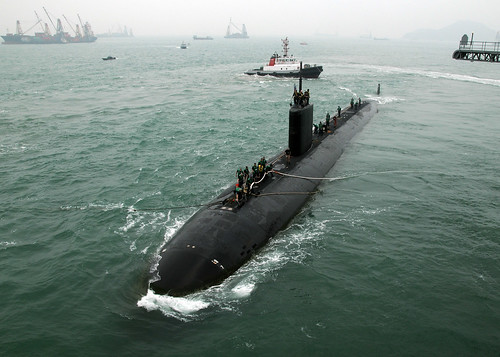 HONG KONG (NNS) — Los Angeles-class fast attack submarine USS Hampton (SSN 767) arrived in Hong Kong May 15, for a port visit as part of its deployment to the Western Pacific.

This is the first port visit to Hong Kong by a U.S. submarine in more than three years.

Hampton moored alongside submarine tender USS Frank Cable (AS 40), which arrived May 14, to provide tended support as part of its mission to conduct maintenance aboard submarines and surface ships throughout the Western Pacific.

With a crew of approximately 134 personnel aboard, Hampton conducts a multitude of missions on her deployment, showcasing the latest capabilities of the submarine fleet.

"Our crew is very excited about visiting Hong Kong," said Cmdr. Tony Lott, USS Hampton commanding officer. "The ship looks forward to enjoying the many cultural experiences that Hong Kong has to offer."

For most of the crew members, this is their first time visiting Hong Kong.

"It is always fun to experience new and exciting cultures," said Yeoman 2nd Class Joseph Pruneda. "The restaurants, shops and the overall experience is something I look forward to."

Measuring more than 360 feet long and weighing more than 6000 tons when submerged, Hampton is one of the most complex submarines in the world. The submarine is capable of supporting a multitude of missions, including anti-submarine warfare, anti-surface ship warfare, strike, intelligence, surveillance and reconnaissance.