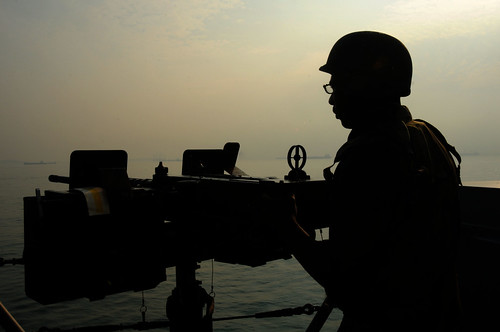 "It's our first time on a U.S. Navy ship," said Tat. "We have been able to observe a number of ship's scenarios, which are very different. There are many differences between our navies and I believe I have learned some useful things to bring back to my own."

"It's very interesting to see people involved in the same kind of warfare who have totally different ways of thinking. We learned a lot from each other," said Thomas.

"I think having these guys aboard gives the opportunity for some interaction between two different, but similar navies, said Denton."

Thomas said that the relationships between officers on the ship seemed indicative of the larger relationship growing between the United States and Malaysian navies. According to State Department officials, Malaysia has made regional cooperation a central piece of it's foreign policy. Cooperation between the 7th Fleet and Malaysian navy in anti-piracy efforts has contributed to the recent decline in pirate attacks in the Straits of Malacca, through which one quarter of the world's traded goods pass through every year.

"I think the Malaysian officers are getting a good opportunity to observe how we work on a day to day basis," said Denton. "I can see how these kinds of military-to-military exchanges can be extremely helpful in getting the U.S. Navy and our allies working together even better."

Lt. Atan added he wanted to bring some of the leadership skills he learned from Avenger Sailors back to his own ship.

"I was very impressed with how Sailors here have very frank debriefings," said Atan. "I think I will be bringing lots of new ideas back to my ship. I am very excited to share this information just as the Avenger has shared with me."

Avenger is currently on patrol in the U.S. 7th Fleet area of responsibility.