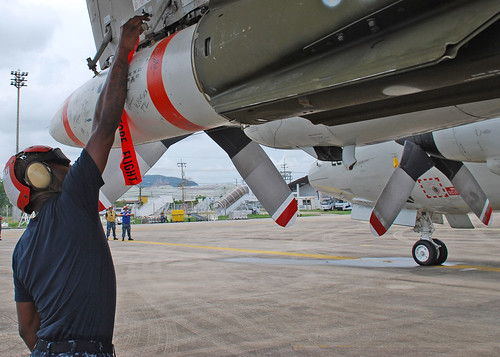 UTAPAO, Thailand (May 14, 2011) Aviation Ordnance Airman Sheltric Peterson, assigned to the Skinny Dragons of Patrol Squadron Four (VP-4), prepares to remove a safety pin from a simulated mine shape prior to an exercise event during Cooperation Afloat Readiness and Training (CARAT) Thailand 2011. (U.S. Navy photo by Lt. Cmdr. Mike Morley)

UTAPAO, Thailand (May 16, 2011) — One of the oldest aircraft types in the U.S. Navy’s inventory has adapted to fill a variety of missions in recent years. This adaptability, and the fact that dozens of navies around the world fly it or some variant of the airframe, made the P-3C Orion the ideal aircraft to participate in Cooperation Afloat Readiness and Training (CARAT) Thailand 2011.

The two navies then boarded each other’s aircraft on the ground and in the air, conducting joint mine laying missions and participating in air defense exercise missions with combined U.S. and Thai Navy surface groups at sea.

“The Thai Navy flies the P-3, so there was a lot of commonality already in our work and procedures,” said Lt. Cmdr. Kim DaCosta, a P-3C pilot and VP-4’s Officer in Charge for the CARAT mission. “The Thai aircrews integrated well with our aircrews, and that’s exactly what this exercise is all about – becoming familiar with one another so when we are called to work together, there’s a baseline of understanding and trust already there.”

During the exercise, VP-4 and the Royal Thai Navy’s 102nd Squadron assembled and dropped a total of 2 mines at sea, mission planned together and conducted various joint missions in support of other CARAT units.

The CARAT mission nears the end to VP-4’s deployment, which earlier saw its crews flying search and rescue missions over Japan for Operation Tomodachi. “Now our crew is making new friends with the Thais through CARAT, so it’s been a great experience,” she added.

CARAT is a series of bilateral military exercises between the U.S. Navy and the Armed Forces of Bangladesh, Brunei, Cambodia, Indonesia, Malaysia, the Philippines, Singapore, and Thailand. Additionally, Vietnam participates in a CARAT-like skills exchange.

For more information on the exercise, visit the CARAT Facebook page. 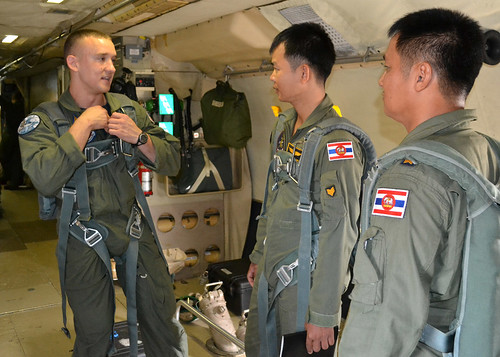