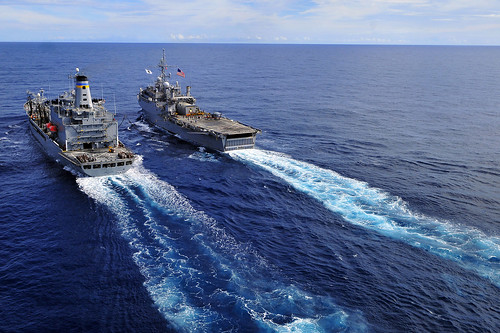 While conducting routine operations in the Solomon Sea May 17, Ericsson received notification from the Maritime Rescue Coordination Centers in Australia and Papua New Guinea at about 11 p.m., to be on the lookout for a missing commercial vessel.

"Visibility at the time was very limited by rain squalls, so it was very fortunate that the mate on watch spotted these commercial sailors," said Kirk.

Ericsson carefully inched close to the boat and the ship's crew secured lines to the small craft. Safely secured alongside, Ericsson brought the commercial sailors on board where they received medical examinations as well as food and water.

"The sailors were tired and dehydrated but they appeared to be in good condition," said Kirk.

According to Kirk, the five Solomon natives said they were transiting between the Solomons' Nissian and Bougainville islands when they became disoriented by bad weather and heavy seas, spending two nights and three days lost more than 35 miles out to sea.

"They had no food and water remaining," said Kirk.

Ericsson's crew was also able to salvage the small boat by placing a large net underneath the vessel, lifting it out of the water using the ship's crane, and securing the boat to the side of the ship for transport. Ericsson then made the short transit to nearby Bougainville Island where the five commercial sailors, along with their vessel, were repatriated ashore.

Ericsson is one of MSC's 15 fleet replenishment oilers that deliver aviation and diesel fuel to U.S. Navy ships at sea. Ericsson was in the region supporting U.S. Navy ships involved in Pacific Partnership 2011, a humanitarian and civic assistance mission in the South Pacific.