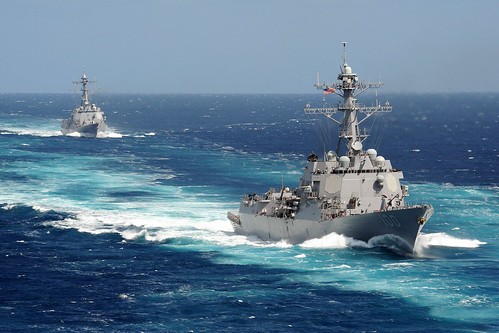 The simulation was the second planned by Commander, Strike Force Training Pacific (CSFTP) as a part of a composite unit training exercise (COMPTUEX) for the strike group.

"The reason we practice strait transit is because we are potentially vulnerable while conducting the operation," said Stennis Tactical Action Officer Lt. j.g. Patrick Emery.

CFSTP was on site in many areas of the ship to observe and evaluate the strike group performance.

"What we saw today was the application of lessons learned from the previous strait transit simulation conducted earlier this month," said Lt. Cmdr. William Wood, CFSTP cryptologic resources coordinator. "This was the most complex evolution of the COMPTUEX and one of the most exciting."

The CSFTP team designed scenarios to test the strike group in tense situations based on real strait transits.

"We observe a foreign country's response to a strait transit and use that intelligence in our simulation so the carrier strike group goes through something as realistic as possible," said Cryptologic Technician (Technical) 2nd Class Nicholas Fugate, CFSTP intelligence analyst mentor trainer. "It is essential for a strike group to perform this training so they know what to expect while on deployment."

CSFTP acted as a fleet commander as part of the exercise in order for the strike group to make requests and perform as if it was a real situation.

"The strike group must request permission from the fleet commander to conduct certain operations while in the various fleets of the world," said Fugate.

The goal of the strait transit simulation was not to teach the carrier strike group to engage and attack potential enemies.

"The goal of the evolution was to teach the strike group to avoid escalating the situation, and to monitor and assess the potential threats," said Thomas. "Restraint is a major component of this exercise."

During the exercise, potential threats were spotted on radar and helicopters were tasked to investigate and report back to the strike group.

"Communication is the key," said Lt. Kyle Johnson, CFSTP helicopter operations officer. "The helicopter squadrons applied the skills learned from the first simulation and are dealing with potential threats to the strike group."

"The strait transit can be a very stressful situation, but I feel we did very well," said Emery.

The strike group is tasked to learn both skill sets required to enter into 5th and 7th fleet.

"Today's exercise was the pinnacle of a 5th Fleet scenario dealing with multiple warfare areas to include maritime security operations," added Thomas. "We constantly update training to incorporate and emphasize important elements learned from 5th and 7th Fleet headquarters. By constantly evolving, we can stay current and give the strike group the best, most-up-to-date tools to be successful on deployment."

As COMPTUEX continues, CSFTP will continue to train Sailors of the John C. Stennis Carrier Strike Group for their upcoming deployment.