USS Avenger Practices Mine Sweeping in Strait of Malacca 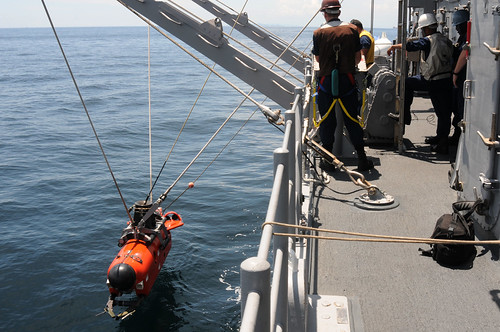 STRAIT OF MALACCA — Mine countermeasures ship USS Avenger (MCM 1) Sailors practiced mine countermeasure operations in the Strait of Malacca May 20, in an evolution designed to train in preparation of real-life contingencies.

Avenger’s Sailors used sound navigation and ranging (SONAR) technology, a SLQ-48 mine neutralization vehicle and a host of other mine countermeasure equipment to train for a possible contingency where the Strait of Malacca would need to be cleared of mines or underwater improvised explosive devices (IED).

The Strait of Malacca is approximately 3 kilometers wide at its narrowest point between Singapore and southern Sumatra, which makes the strait vulnerable to mining and underwater improvised explosive devices, Mineman 2nd Class Dana Baynard said.

"A lot of ships transit this area and in a real-life scenario, it would be vital for us to be able to assure their safe passage," said Mineman Seaman Daniel Duncan, one of the mine neutralization vehicle operators aboard Avenger. "I think we would be able to do actual mine clearance in the Strait of Malacca due to our aggressive training."

To effectively simulate the SONAR signature of a mine, Sailors lowered a mine shape into the water from a rigid hull inflatable boat. A team in the combat information center was then responsible for locating and disarming the simulated mine.

Throughout the evolution, the crew made safety and risk mitigation a high priority. Safety officers were on-scene to ensure that proper personal protective equipment was being used and crew members were following correct procedures.

"The team that was conducting operations is very well disciplined and they're not satisfied until the job is done well," said Ensign Garth Thomas, a safety officer aboard Avenger. "I'm very proud of their work today."

In the past two years, the U.S. 7th Fleet has doubled its mine countermeasure capability.

Avenger, which just completed a scheduled port visit in Lumut, Malayasia, is commanded by Lt. Cmdr. Patrick L. German and is on patrol in the 7th Fleet area of responsibility.