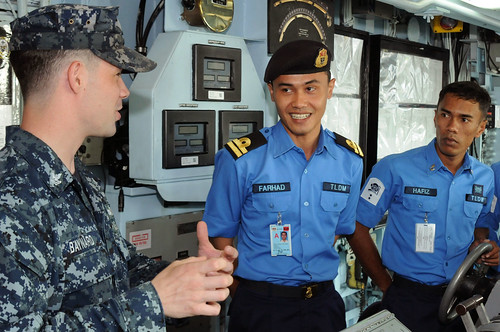 LUMUT, Malaysia — Sailors aboard USS Avenger sponsored a series of community outreach activities May 17-18 designed to build upon the growing relationship between the U.S. Navy and the Royal Malaysian Navy.

The outreach efforts began with a visit to the Rumah Wawasan orphanage in Lumut, where Sailors delivered food supplies and played sports with local children. The owner of the orphanage, who requested not to be named, but is referred to by the children as “Papa,” expressed his gratitude to Avenger Sailors for their help.

"I hope that we can start an ongoing relationship and I will get to see you all again," said Papa. "I thank god I've got friends like you navy boys. This is truly a miracle."

Avenger Sailors also hosted a series of ship tours May 18 for Malaysian navy personnel, displaying the Navy’s most advanced mine sweeping technology. During the last two years, the U.S. 7th Fleet has doubled its mine sweeping capabilities, which are uniquely suited for securing the passage of merchant vessels through narrow sea lanes.

Mineman Seaman Jonathan Cedeno, an Avenger tour guide for one of the groups, said that the Malaysian officers were impressed with the capabilities of the mine countermeasure ship platform.

"Many of them have never seen the kind of advanced robotics and equipment that we use to locate and detonate mines," said Cedeno. "I think we really piqued their interest. They said they were interested in working with us in the future, to see if we could coordinate mine sweeping operations as a team."

Later that day, Avenger Sailors hosted a dinner party for Royal Malaysian Navy personnel. Royal Malaysian Navy Cmdr. Mohd Roslim Bin Hilmi spoke at the event about the strength of the U.S.-Malaysian relationship. "Although our operating procedures may be different, at the end of the day, the U.S. and Malaysian navies are working for the same goal," he said.

The commanding officer of Avenger, Lt. Cmdr. Patrick L. German, gave a token of appreciation to the Royal Malaysian Navy personnel for their hospitality during Avenger's stay in Malaysia.

"Our two countries share so much in common and together we have achieved so much, said German." I am so happy to think that as our navies rise together, this is only the beginning."