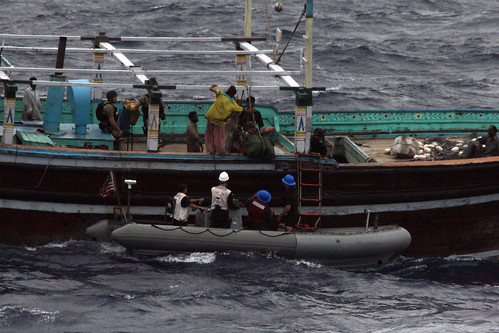 Al Sohail was adrift with no communications and little food or water after having lost power. Unable to send a distress transmission, the crew attempted to rig a sail out of rugs.

On May 17, an Australian aircraft assigned to Combined Maritime Forces' (CMF) Coalition Task Force (CTF) 151 spotted the vessel as its crew signaled their distress.

5th Fleet's CTF 50, under the command of the USS Enterprise Carrier Strike Group (ENTSG), directed Hopper to render assistance to the Al Sohail. ENTSG's meteorology and oceanography team made drift calculations based on the sea state, current and winds to assist Hopper in locating the drifting vessel. Hopper located Al Sohail and arrived at its location around sunset, May 18.

Hopper sent a small boat to assist Al Sohail, and provided them with additional food and water, minor medical assistance and engineering support to attempt to repair its engines overnight. It was determined that Al Sohail's engines could not be repaired by Hopper's crew.

Working through 5th Fleet and CMF, a Pakistani naval vessel was contacted and requested to assist. The Pakistani frigate PNS Tariq (F 181) arrived on scene and took charge of the assistance efforts late in the evening, May 19.

Hopper is on a routine deployment and is conducting Maritime Security Operations in the U.S. 5th Fleet area of operations.