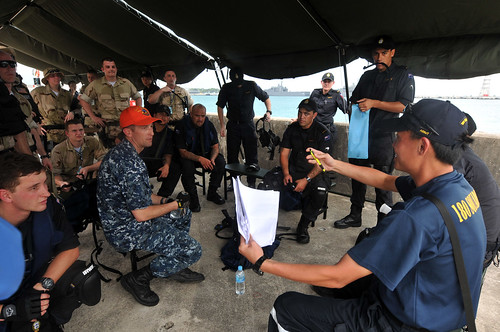 “It’s events like these that help build relations with all of our partner countries throughout the region,” said Cmdr. Steven DeMoss, commanding officer of McCampbell. “It is always a good thing any time we can come together as maritime partners to learn more about each other.”

The McCampbell VBSS team trained alongside VBSS teams from the New Zealand, Thailand and Singapore navies. Following three days of classroom training and discussions, the VBSS team conducted practice runs in a dedicated facility before conducting a simulated compliant boarding of a Singaporean vessel. The evolution had the team scaling a ladder, conducting a search of the ship and arresting two simulated suspects.

“The training gave us a rare chance to work with several teams at the same time,” said Engineman 3rd Class Julie Swank, from Victorville, Calif. “The live boarding exercise was definitely a challenge, but I think the team as a whole came away with a lot of knowledge on how to board a vessel and conduct a search.”

With more than a dozen ships moored at Changi Naval Base. Sailors took advantage of seeing how their counterparts in other countries worked and lived aboard their warships. As McCampbell Sailors took the opportunity to tour other ships, the ship also welcomed sailors from the other navies in attendance.

“It was great to see all these countries come together in such a distant port and learn about each other,” said Ens. Jake Huntley, from Minneapolis, Minn. “While giving tours I found it interesting that the sailors from every country had questions about different things, whether it be about if we ate meat at every meal or if men and women worked together in the same roles.”

With all the ships in attendance, the Republic of Singapore Navy used the opportunity to invite senior enlisted members of all the navies, in order to share information and to get to know their counterparts better.

“It was definitely an interesting experience,” said Fire Controlman 1st Class (SW/AW) Candi Hogate, from Vernon, Texas. “Despite working with other nations during exercises, we don’t normally have a chance to specifically talk about leadership within our own organizations. I think this has been a great opportunity.”

As IMDEX 2011 came to a close, McCampbell held a reception on its flight deck for foreign and U.S. dignitaries to include Adm. Patrick Walsh, commander of U.S. Pacific Fleet, Chief of the Singapore Navy, Rear Adm. Ng Chee Ping and the heads of ten different navies.

“I think IMDEX 2011 has been a great opportunity for the ship and the crew to get to learn more about our regional partners,” said DeMoss.

McCampbell is assigned to Destroyer Squadron 15 and on patrol in the 7th Fleet area of responsibility.