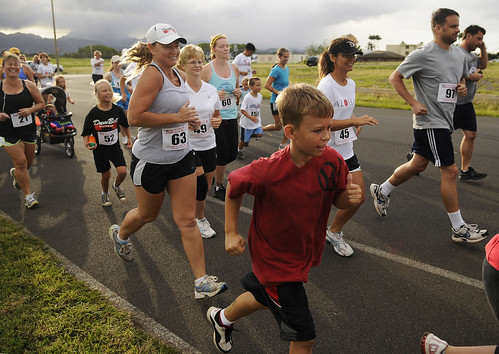 Participants at the Kizuna 5K Fun Run/Walk event begin running to benefit the people affected by the earthquake and tsunami in Northern Japan in March 2011.

JOINT BASE PEARL HARBOR-HICKAM, Hawaii — Navy spouse Emiko Coughlin, together with the COMPACFLT Officers’ Spouses Club, hosted the Kizuna 5K fun run/walk, May 21 to benefit those affected by the Japanese earthquake and tsunami last March 2011.

More than 160 service members and families participated in the fun run and raised more than $4,000 in proceeds to be donated to the American Red Cross. “I am from Sendai,” said Coughlin. “I continue to receive frequent phone calls from my parents who still live in the area. Sendai was devastated by the earthquake and tsunami. Those who remain continue to face great hardship. I felt strongly that I wanted to help the people of Sendai. Not only did I want to raise funds for the recovery effort, I wanted to send hope and encouragement.”

The fun run consisted of two laps around the old Ford Island runway. Participants received T-shirts after the run.

James Campbell High School Navy Junior Reserve Officer Training Corps (JCHS NJROTC) also volunteered 18 cadets for the event as they assisted in setting up and directing runners around the runway.

Adm. Patrick M. Walsh, U.S. Pacific Fleet's commander, welcomed the runners and thanked them personally for their willingness to participate in the benefit run.

“We’re coming out to help everyone run, basically falling in where we need to be, where they need help,” said Michael David, 16. David is the JCHS NJROTC student leader, and he said he was happy to be at the fun run to benefit Japan.

Lt. Cmdr. Dennis Wischmeier, assigned to Commander, Submarine Force U.S. Pacific Fleet, was the first to finish the fun run. Wischmeier lived in Japan for three years, and he said the earthquake and tsunami was a devastating tragedy.

“It doesn’t matter how I finished the race, it was good to run it,” said Wischmeier. “It was for a good cause.”

The COMPACFLT Officers’ Spouses Club is a social organization designed to promote camaraderie among the officers’ spouses in all branches of the military here in Hawaii. Membership is open to spouses of active duty, reserve and retired military officers. The club organizes a variety of special interest groups designed to introduce members to recreational and cultural opportunities in Hawaii. 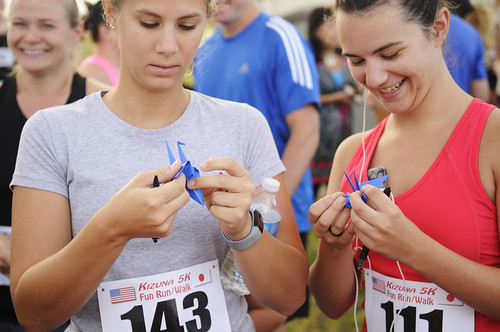 Participants at the Kizuna 5K Fun Run/Walk event write short messages on origami cranes to the people affected by the earthquake and tsunami in Northern Japan in March 2011. 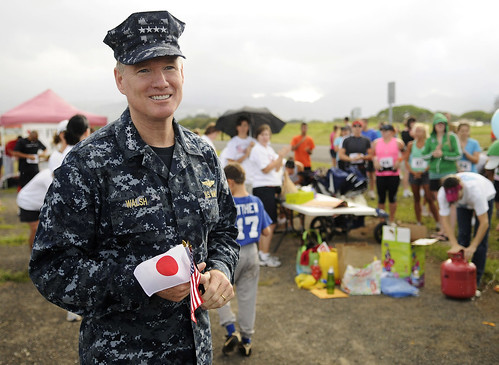