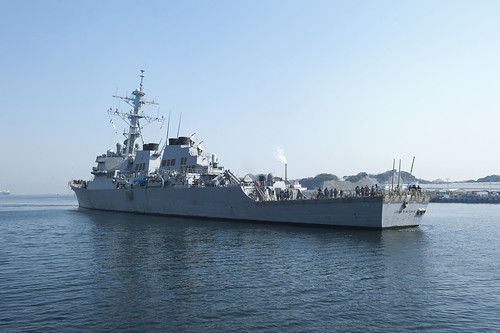 Typhoon Songda is currently southwest of Okinawa with winds of 105 knots gusting to 130 knots, according to the Joint Typhoon Warning Center.

The aircraft carrier USS George Washington (CVN 73) and the guided-missile destroyer USS Stethem (DDG 63) are both undergoing maintenance in Yokosuka and will remain in port.

Ships in Sasebo, Japan, are being closely monitored, but are not expected to sortie as sustained winds are forecast to remain below gale force.

Several ships at sea also adjusted their tracks to remain clear of the storm.

There are 60-70 ships, 200-300 aircraft and more than 40,000 Navy and Marine Corps personnel assigned to the 7th Fleet. This includes forces operating from bases in Japan and Guam and rotationally-deployed forces based in the United States. Commander, U.S. 7th Fleet, is embarked aboard the command flagship USS Blue Ridge (LCC 19), forward deployed to Yokosuka, Japan.