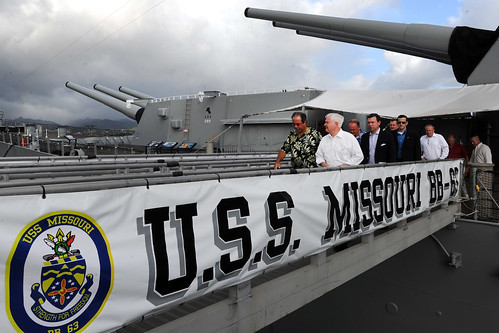 PEARL HARBOR, Hawaii — Secretary of Defense Robert Gates toured the Battleship Missouri Memorial during a stopover on Oahu enroute to a summit in Singapore, May 31.

Missouri's historical significance during WWII, and the nation's recent observance of Memorial Day were contributing factors for Gates' visit to the memorial; however, Gates had a more personal reason for visiting.

"I particularly wanted to visit because my wife is the sponsor of the newest U.S. warship named Missouri, a nuclear attack submarine, which was commissioned last year. One of the mementos she was given was one of the original planks of this ship," Gates said of the memorial where World War II ended with the Japanese surrender on its deck.

Gates spent about an hour on the historic battleship, accompanied by Michael Carr, president and chief operating officer, Battleship Missouri Memorial. The secretary briefly spoke to the media after disembarking from the memorial, from a site near the bow of the ship. From there, he faced the Arizona Memorial.

"It seems to me visiting this ship and looking at the Arizona Memorial is fitting the day after Memorial Day. It serves as a reminder of all of those who serve and made the supreme sacrifice for our country," Gates said.

Gates acknowledged how the men and women of Hawaii continue to make contributions in service to the country. In particular, he spoke of his recent visit in Iraq to Soldiers from the U.S. Army 25th Infantry Division, based in Hawaii.

"I just want to thank all the people of Hawaii for the support that you provide to the United States military and all the services," he said.

Gates was scheduled to depart for Singapore where he will participate in the Shangri-La Dialogue to outline continued U.S. commitment to the Asian-Pacific region, and also meet a number of defense ministers.

According to the Defense Department, this is the secretary's fifth and final trip to the Asia security summit, which is sponsored by the International Institute of Strategic Studies.