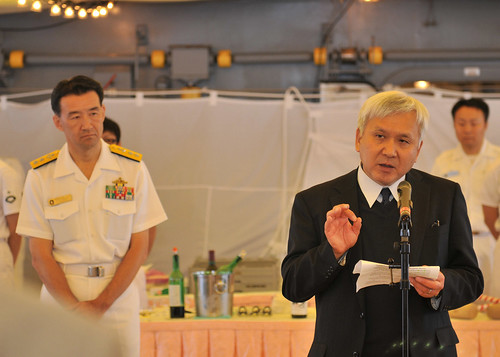 The JMSDF flagship Kashima visited Seattle's port June 15-18, as part of a four-month deployment to multiple ports in the United States, Canada, Mexico, Peru and Chile. During the training the JMSDF band is embarked as the ship's crew.

"We felt very welcomed, and we felt we received a lot of energy from the crowd performing," said Lt. j.g. Masamichi Tanabe, bandmaster, JMSDF Training Band. "It was absolutely wonderful, and we were absolutely honored to play with the U.S. Navy band."

The Consulate-General of Japan in Seattle, said this year's visit is especially meaningful to Japan, which has received significant assistance from the U.S. and its military, in response to rescue and recovery efforts immediately following the devastating earthquake and tsunami which struck the Tohoku region this past March.

"This type of concert gives us awareness of each other's talents," said Musician 3rd Class John Head, a member of Navy Band Northwest. "It's a joy to be a part of."

The mission of Navy Band Northwest is to provide musical support for official Navy functions and Navy recruiting efforts, and to serve the communities of the Pacific Northwest in a public relations capacity.

"It's an honor to play with these great musicians from Japan and they are all very good musicians," said Head. "It's very humbling."

More than 200 service members, Department of Defense personnel, and civilians from the Seattle area attended the event.

JSMDF have made such deployments since 1957, marking its 55th year on such deployments. The last time a JSMDF vessel visited Seattle was in 1998, when the JSMDF Escort Flotilla visited.

Kashima is staffed by nearly 300 crew members, including 116 officer trainees in the JSMDF.