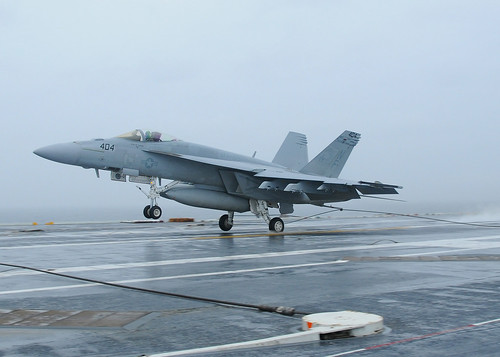 "Landing on the ship can be very dangerous and takes a lot of practice," said Commander, Carrier Air Wing 5 Capt. Daniel Cave. "We do CQ so we can get everyone up to speed and proficient in landing on the carrier."

Since December of 2010, George Washington has been pier side at its forward operating port Commander, Fleet Activities Yokosuka, Japan, undergoing maintenance. It has been more than six months since the CVW 5 pilots have landed on a carrier at sea. CQ gives those pilots time to hone their skills at landing on a pitching flight deck.

Before landing on board George Washington, the pilots had to complete field carrier landing practice (FCLP) on the small island of Iwo To, formerly known as Iwo Jima. There, the pilots practice landing procedures, perform touch-and-go's on land, and are graded on their performance by landing signal officers.

Due to George Washington's unique schedule as the Navy's only fulltime forward-deployed carrier, CQ puts Sailors from the ship's Air department in a high pressure environment. What may take other carriers a few weeks to do, George Washington has to complete in just a matter of days.

"We can get this done; qualify all the pilots in just three days," said Aviation Boatswain's Mate (Handling) 1st Class Reginald Hobson, flight deck leading petty officer from San Antonio, Texas. "In two words, it's controlled chaos. It makes things a little more stressful and busy, but with a few long days, a little hard work and great teamwork, every pilot in the air wing is now qualified."

The return of CVW 5 doesn't just mark the beginning of the carrier's summer patrol; it also marks a new chapter in naval aviation history. George Washington is now the first carrier in the fleet to transition completely from the F/A-18 Hornet to the F/A-18 Super Hornet.

"The aircraft availability will go up with newer aircraft being on board," said Cave. "The Super Hornet is definitely more survivable and more capable."

George Washington began its summer patrol June 12, departing its forward operating base of Commander, Fleet Activities Yokosuka. On board are more than 5,500 Sailors from George Washington and Carrier Air Wing 5. George Washington's mission is to ensure security and stability in the Western Pacific and to be in position to work with allies and regional partners to respond to any crisis across the operational spectrum as directed.