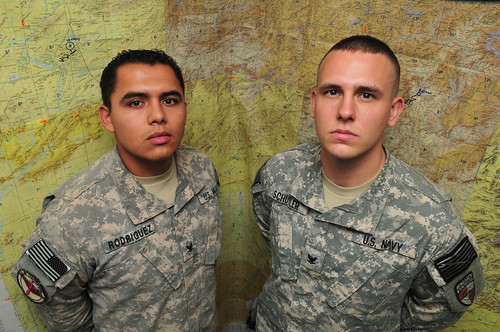 Intelligence Specialist (IS) 3rd Class Armando Rodriguez works alongside IS3 Steven Schuyler at the Kandahar Air Wing, and along with seven other Sailors, they make up a small Navy contingent which works daily with U.S. Air force members to advise the Afghan Air

Group Support: A typical day involves arriving at the intelligence mission planning cell 90 minutes before each scheduled AAF Mi-17 flight. The analysts provide a current threat assessment to the aircrew. This includes a brief on the location of travel, potential threats along planned routes and critical information discovered in daily threat reports.

Aircrews are made up of Americans, Lithuanians and AAF members. Although language barriers provide a challenge during pre-flight briefs, intelligence experts agree they have seen a dramatic change in the AAF in regards to the exchange of information.

"One big change is that the AAF flight crews are now discussing maneuvering and threat avoidance during our pre-flight brief," explained Schuyler, who is originally from Muncie, Ind. "They now talk about threats along the routes and are communicating which is a good thing."

After the pre-brief, the analysts issue communication equipment needed to ensure crews have the necessary tools needed in case of an emergency. One piece of issued equipment is a traveling beacon known as "Blue Force Tracker." The tracker is used as a locating device to give intelligence experts an exact pinpoint of where the Mi-17 helicopter and crew are at any given moment. They also issue a satellite phone that can be used to discuss important information as well as a booklet with helicopter landing zone cards, imagery of all helicopter landing zones and list of potential flying hazards and frequencies. Experts explain their aim is to provide a common operating picture of the landscape and terrain while maintaining safety of the crew.

"Our goal is to keep aircrew and aircraft safe. It's very important we teach the AAF now where and why to fly so they can return here unharmed," said Rodriguez.

Advising Mission: When not performing the operational mission, the intelligence unit works to train AAF intelligence advisees. Each member of the AAF team begins their training at the Basic Air Intelligence Course in Kabul before transitioning to Kandahar. The intelligence Airmen in Kabul provide initial training by building training folders for the Afghans and they must demonstrate they can complete basic level-three training before they can transition to KAW. When they arrive, the analysts in Kandahar review and assess the advisee's weaknesses and work with them to strengthen those particular areas.

"We're very fortunate; we see the progress in front of our faces and we see them learn," said the Jacksonville, Fla. native Rodriguez. "The AAF members we have here are working for their jobs and for their country. The motivation is there; we can see it."

To avoid complacency in the training environment, the advisors switch off week to week between training and operations, teaching the Afghans basic map reading skills, how to navigate routes, plot points and pull points on a map has increased the mission, said Schuyler.

Being able to point to a location on a map and having them come up with latitude and longitude is great progress, he explained.

Although progress is being made, there are still deficiencies the team is working to overcome. Because of the relative newness of intelligence agencies in Afghanistan, it's still somewhat difficult for Afghans to share information, said Schuyler.

"We also have motivated Afghans that work here with us, so it's hard to keep them here and work with us for an extended period of time," he said. "On occasion, they may be pulled to perform other duties simply because they've demonstrated the ability to excel here."

Despite the high-operations tempo already displayed at the intelligence unit, the crew is about to get even busier with the possibility of the arrival of AAF C-27s. Due to the fixed-wing aircraft's greater reach, the analysts will now have to assess a greater area than they typically do with Mi-17s.

"We primarily focus on Regional Command south and southwest," said Schuyler. "C-27s will greatly expand our area of responsibility and coverage area."

Despite all the challenges, if anyone can handle the uniqueness of working in a different environment, it's IS3 Rodriguez and Schuyler who both grew up in Navy families. IS3 Rodriguez's father, avionics technician Master Chief Petty Officer Armando Rodriguez, is still on active duty and assigned to the Amphibious Assault Ship USS Boxer in San Diego, Calif., while Schulyler's father is a retired Sailor.

"Joining the Navy is what I wanted to do," said Rodriguez. "I've learned a lot here and it's been a great experience.”