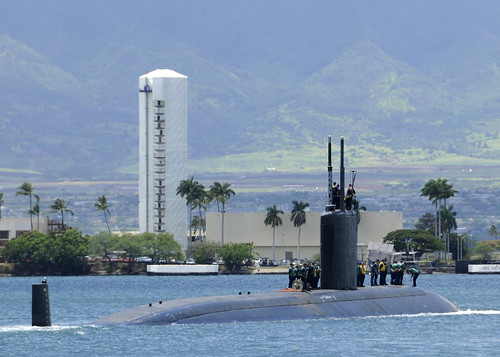 "The ship is in excellent material condition and the crew is excited and ready to go," said Columbia's Commanding Officer, Cmdr. Dennis Klein. "I am proud of how hard the men have worked in preparing themselves for the deployment and I appreciate all the continued support our families have provided."

For many crew members of Columbia, this deployment will once again allow them to utilize their training.

"Being just over a year from the end of Columbia's last deployment, a majority of the crew have WESTPAC experience," said Klein. "They all clearly understand the importance of our mission."

According to Klein, Columbia will be conducting many training exercises and qualifications, as well as be available for any tasking which comes their way.

Columbia, commissioned in 1995, was the last 688-class submarine to be built at Electric Boat Shipyard in Groton, Conn. One of the most versatile ships in the world, Columbia is capable of numerous types of missions in a myriad of regions including long range Tomahawk strike operations, anti-submarine and surface ship tracking operations, surveillance and intelligence gathering, and Special Forces insertions.