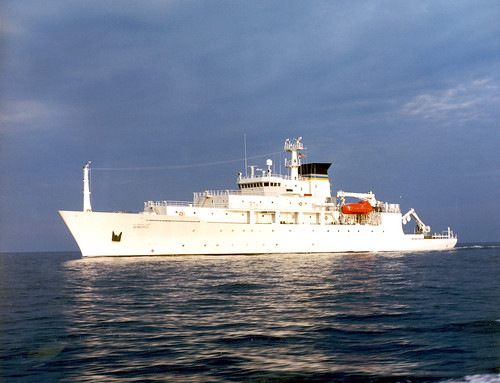 “This joint U.S.-Vietnam mission to investigate underwater crash sites is using one of naval oceanography’s world-class survey ships to augment the efforts of JPAC,” said White. “The level of cooperation is a great example of the strengthening relationship between our two nations.”

Guests at the reception included representatives from the Vietnam Ministry of Natural Resources and Environment, Vietnam Department of Survey and Mapping, Vietnam Administration for Seas and Islands, and the Vietnam People’s Navy.

With its embarked team of 12 oceanographers and hydrographers from the Naval Oceanographic Office, or NAVOCEANO, Bowditch conducts a wide range of survey operations covering the disciplines of physical oceanography, hydrography and bathymetry, acoustics, and geophysics. The Hawaii-based JPAC focuses on continued efforts to locate, recover and identify U.S. service members unaccounted for from past conflicts.

Bowditch is operated and navigated by 24 merchant mariners who work for a private company under contract to MSC.

Bowditch surveyed pre-determined sites off Vietnam’s coast May 20 to June 20 looking for U.S. military losses from the Vietnam conflict in underwater environments.

“For the crew of Bowditch, it has been a rewarding experience working with the JPAC and Vietnamese liaisons to complete a mission that has so much meaning to the American people,” Farrell said.

Bowditch’s embarked Hydrographic Survey Launch – a 34-foot, 15,000-pound craft that resembles a commercial yacht but carries state-of-the-art survey equipment – was deployed to survey waters close to shore. Three JPAC personnel and five of their counterparts from the Vietnamese Office for Seeking Missing Persons embarked Bowditch for the mission and provided the data collected from underwater surveys to the government of Vietnam.

“The synergy amongst the U.S. and Vietnamese team has been superb,” said Ron Ward, JPAC team leader embarked aboard Bowditch. “The Vietnamese government has been very flexible throughout the mission in allowing us to collect as much data as possible.”

Once all data has been collated, JPAC analysts, including underwater anthropologists, will review the survey results. If warranted, JPAC will schedule future underwater investigations to further define the nature of the targets of interest or conduct underwater recovery operations.

Bowditch’s survey mission is the second JPAC-sponsored mission by a Pathfinder-class ship to Vietnam, following USNS Bruce C. Heezen’s search for sunken U.S. aircraft in 2009. “Our survey crew was eager to participate and very proud to execute this humanitarian mission along with our Vietnamese colleagues,” said Robert Delgado, the senior NAVOCEANO representative aboard Bowditch.

NAVOCEANO is the largest subordinate command within the Naval Meteorology and Oceanography Command, and is responsible for providing oceanographic products and services to all elements of the Department of Defense.