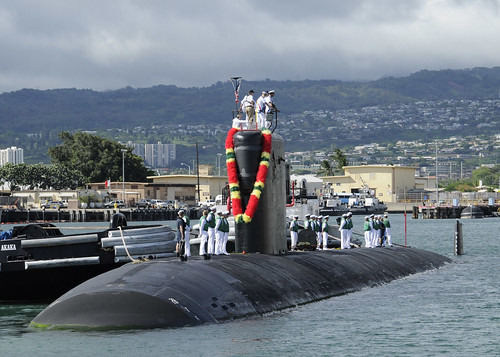 "This was a great and extremely successful deployment for Pasadena," said Cmdr. Andrew St. John, USS Pasadena's commanding officer. "The crew operated this submarine with pride and professionalism responding to every challenge that came our way."

Pasadena departed Pearl Harbor Dec. 14, 2010, on her Western Pacific deployment. After operating in the dynamic environment of the Western Pacific, they returned with advanced qualifications. Twenty-two crew members became submarine qualified and are now authorized to wear the Submarine Warfare insignia or "Dolphins."

"With 30 percent of the crew on their first deployment, I could not be more proud," said St. John. "They proved that we can take this submarine any place we need to go at any time."

Over the course of the deployment Pasadena completed multiple missions in the 7th Fleet area of responsibility, as well as several port visits. Port visits to Saipan, Yokosuka, Sasebo and Guam allowed the crew to experience the unique cultures around the Pacific Rim.

Los Angeles-class submarines are ideally suited for covert surveillance, intelligence gathering and Special Forces missions. This stealth, when combined with the submarine's Tomahawk cruise missiles, mines and torpedoes, provide the operational commander with an unseen force multiplier. USS Pasadena was commissioned in July 1991 and is the U.S. Navy's second "Improved" Los Angeles-class nuclear-powered submarine. Throughout its 20-year history, Pasadena has deployed to and conducted operations in virtually every part of the Pacific Ocean, from the west coast of North and South America to Australia and the Persian Gulf.