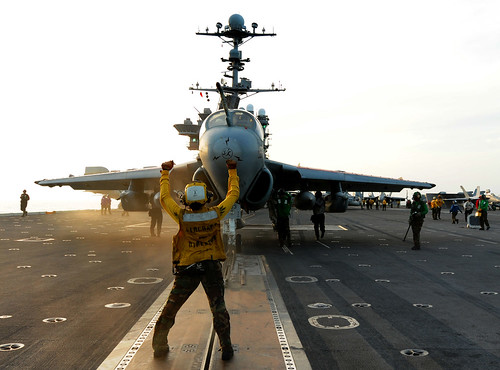 COE tests the ability of George Washington and CVW-5 to safely and efficiently launch and recover aircraft at sea according to Navy-wide standards. Before passing the evaluation, the ship and air wing are required to operate within approximately 100 miles of a land-based air field. Successful completion of COE qualifies CVW-5's pilots to fly over open-ocean without an accessible land-based air field, also known as Blue Water Certification.

"The ultimate objective of COE is to allow the GW/CVW-5 team to operate in a 'Blue Water' condition," said George Washington Air Operations Officer, Cmdr. Jerry Stokes. "This means we can conduct operations either very far out at sea or in certain geographic areas where there are no suitable landing areas or divert air fields."

COE evaluates the air wing pilots and George Washington Air department Sailors on launching and recovering aircraft, arming and disarming weapons systems and how the team responds to a variety of different emergency situations.

Due to George Washington's unique schedule as the Navy's only full-time forward-deployed carrier, COE can be completed in a matter of days as opposed to carriers based in the United States which take more than a week.

"All carriers go through a similar process when they're getting ready for their deployment," said Stokes. "We're very fortunate that we operate so much. It's much easier for us to come out and show our proficiency and meet all the requirements and proceed with our mission."

After the team has passed the evaluation and is given the green light for Blue Water Certification, George Washington and CVW-5 will have the ability to conduct cyclic operations whenever and wherever they are needed in the western Pacific ocean.

George Washington began its summer patrol June 12, departing its forward operating base of Commander, Fleet Activities Yokosuka. On board are more than 5,500 Sailors from George Washington and Carrier Air Wing 5. George Washington's mission is to ensure security and stability in the Western Pacific and to be in position to work with allies and regional partners to respond to any crisis across the operational spectrum as directed.