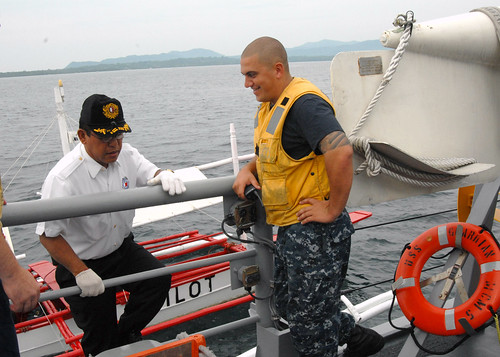 The port visit is part of Guardian’s Western Pacific deployment, and also happens to be where Culinary Specialist 3rd Class Alden Castillo was born.

Castillo had no idea visiting his hometown would be possible while traveling with the Navy, until Lt. Cmdr. Kenneth Brown, Guardian’s commanding officer, announced that Puerto Princessa would be a port visit on their deployment.

“I didn’t really know what to say, I was so excited,” Castillo recalled. “I haven’t been back in so long; it will feel good to see family again.”

Castillo’s mother and younger sister moved to the United States when he was 3 years old. He was raised by his aunts, uncles and grandparents until he graduated from high school in 2002. After that, with the help of his mother, he petitioned for a student visa in the United States, and got accepted to a nursing school in San Diego, where his mother and sister live.

After two years of school, Castillo fell on hard times. Nursing wasn’t working out as planned, but he wanted to continue working in the United States. His mother suggested joining the Navy, something he had not previously thought as an option, so he met with a recruiter and joined as a culinary specialist.

“I really love cooking. It feels more like a hobby than work,” Castillo said.

After boot camp and culinary training school, Castillo reported aboard Guardian, forward deployed out of Sasebo, Japan, where he currently serves.

Upon arrival in Puerto Princessa, Castillo will be met by two of his cousins, and pick his fianc up at a nearby airport to spend time with his family during the port visit. Guardian and Avenger are on patrol in the Western Pacific in the 7th Fleet area of responsibility.