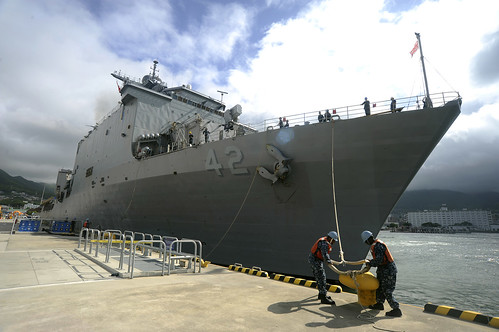 SASEBO, Japan (NNS) — Ships of the forward-deployed Essex Amphibious Ready Group (ARG) got underway June 23 for a patrol of the Western Pacific region and to participate in the bilateral exercise Talisman Sabre 2011 (TS11).

Talisman Sabre is a biennial, joint sponsored exercise by U.S. Pacific Command and Australian Defense Force (ADF) Joint Operations Command. With approximately 14,000 U.S. and 9,000 Australian personnel expected to participate, TS11 is the largest joint military exercise undertaken by the ADF. The exercise is conducted to improve bilateral operations between the U.S. and Australia.

"Our countries have built a close relationship, which enables us to work together across the spectrum of military operations," said Capt. Bradley Lee, commodore of Amphibious Squadron 11. "Our joint cooperation has helped stabilize the region as we saw in Indonesia following both the 2005 tsunami and the 2009 earthquakes. This joint exercise will further strengthen civil-military collaboration for future operations and bilateral partnerships between the United States and Australia."

U.S. and Australian forces will conduct land, sea and air training around the Australian coast and also practice their ability to conduct joint humanitarian assistance and disaster relief operations. This type of training has proved extremely relevant for units of Essex ARG, which returned in April from providing disaster relief to regions of Japan affected by the March 11, earthquake and tsunami.

"In the past two years, the Essex ARG has conducted five humanitarian assistance and disaster relief missions throughout the Western Pacific, which is why this type of training with our allies is so essential," said Lee.

Capt. David Fluker, Essex commanding officer, said the exercise will allow his crew to practice a range of skill sets with their Australian counterparts.

"This exercise will allow us to demonstrate the ship's capabilities across the entire spectrum of missions, from amphibious operations to humanitarian assistance and disaster relief," said Fluker. "We are also very proud to be conducting this exercise alongside our fellow Royal Australian Navy professionals."

During operations at sea and ashore, the units assigned to Essex ARG will adhere to strict environmental standards.

"We will continue to take every precaution we can to ensure that we are good stewards of the environment during exercise Talisman Sabre," said Fluker. "The Navy and Marine Corps team take very specific measures to protect the environment that we operate in, and the coastal waters and shore of Australia are not different."