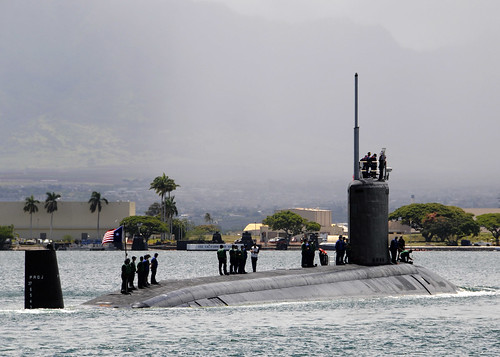 “USS Texas is the most advanced nuclear attack submarine deployed to the Western Pacific,” said Cmdr. Bob Roncska, USS Texas Commanding Officer. “We provide the operational commander a flexible asset to meet regional defense policy goals, and I am confident of my crew’s absolute responsibility to always be ready to answer the nation’s call.”

This is Texas’ maiden Western Pacific deployment since changing homeports to Pearl Harbor in November 2009 and the crew morale is that of excitement and pride. The ship has several new crewmembers that will participate in their first deployment.

Electronics Technician 3rd Class Justin Williams, who recently reported onboard in April, 2011 describes his feelings as “ready to provide to the mission.”

“I am very anxious to further my submarine training and gain the experience of a deployment,” Williams said. “I am also excited about visiting foreign ports and seeing the world.”

Commissioned Sept. 9, 2006, Texas was the second Virginia-class attack submarine constructed and the first submarine to be named after the Lone Star State. The state-of-the-art submarine is capable of supporting a multitude of missions, including anti-submarine warfare, anti-surface ship warfare, strike, naval special warfare involving special operations forces, and intelligence, surveillance, and reconnaissance.

Previous story
U.S., Philippine Navies to Join for CARAT Exercise in Palawan
Next story
Cruising the Gulf of Alaska during Northern Edge