Cruising the Gulf of Alaska during Northern Edge 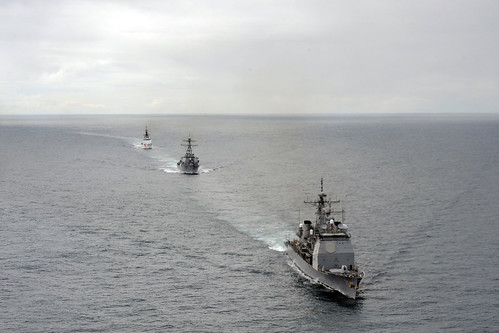 JOINT BASE ELMENDORF-RICHARDSON, Alaska - Several ships from the Navy and Coast Guard cruised to Alaska to participate in the two week exercise Northern Edge.

Some played the role of blue forces, or the ‘good guys,’ and others played the opposing forces role. Ships participating in the training were the USS Decatur, USS Lake Erie, USCG Sycamore, USCG Long Island, USCG Bertholf and the USNS Rainier.

The USS Lake Erie is fulfilling the mission of air defense commander, responsible for controlling the skies and detecting, tracking and engaging enemy aircraft that penetrate through the friendly air defense barrier, according to Navy Lt. Cameron Will, the Aegis cruiser USS Lake Erie fire control officer.

The USS Decatur was one is filling two roles, participating as blue forces and opposition forces.

Also patrolling the waters of the Alaskan gulf as opposition forces are the USCG Sycamore and USCG Long Island.

While aiding the Navy and Air Force pilots with their training, the ships’ crews have also completed their own training.

The training was broken into two sections – one with aircraft present and one without.

“During the windows of time each day when the exercise was going on, our sailors got plenty of practice engaging air threats in self defense and in defense of other units,” said Navy Lt. Meghan Bodnar, the USS Decatur operations officer. “After the training window each day, the other ships we were with did plenty of shipboard training with us, such as small boat operations, DIVTACS [driving the ships in formation], gunnery exercises and signaling exercises.”

In addition to routine shipboard safety and survival training, the USCG Long Island also completed towing, refueling at sea and rescue and assistance training with the USNS Rainier and USCGC Sycamore.

Though the ships may work with their own service often, it is quite rare for them to work in a joint environment such as this. However, both the Navy and the Coast Guard are seagoing maritime forces, so there is commonality in their mission and nautical background.

“[Northern Edge] has helped us work out of our comfort zone, we normally work with the same group of ships and have a feeling for their usual operations,” said Andrews, a native of Redmond, Wash. “Working with ships from Hawaii and Washington has reinforced the need for standard communications and operating procedures. Every event has run smoothly, although we've had a few lessons learned.”

Communication is critical to successful operations and integrating joint forces, according to both services’ officers.

“No matter the homeport, branch of service or mission capabilities, we are all on the same team and can learn a lot from each other,” said Andrews. “We've all learned a lot and have gotten invaluable training. NE has been well worth our time and has provided lessons and experiences that we will never forget, and may not have the chance to repeat.”