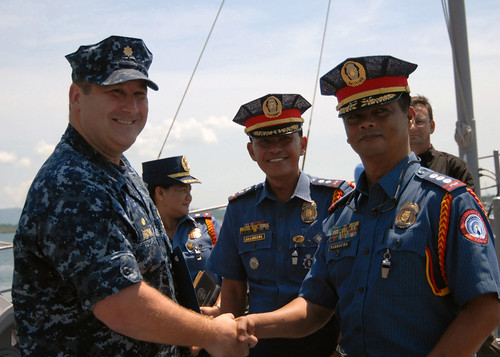 PUERTO PRINCESA, Republic of the Philippines - The crew USS Guardian (MCM 5) invited Officials from the Puerto Princesa City Police to tour the ship June 27, as a gesture of thanks for the support and hospitality the City of Puerto Princesa has shown visiting U.S. Sailors.

At the end of the tour, Guardian’s Commanding Officer, Lt. Cmdr. Kenneth Brown, presented the City Director Parrocha with a commemorative photo of the ship and a ship’s coin in appreciation of their visit, and how welcoming Puerto Princesa has been for the crews of Guardian and USS Avenger (MCM 1). The other members of the tour group were also presented with a ship’s coin as thanks for coming out to see the ship.

Guardian and Avenger arrived in the city on June 23, and will continue on their scheduled MCM Western Pacific Deployment throughout the 7th Fleet area of responsibility.