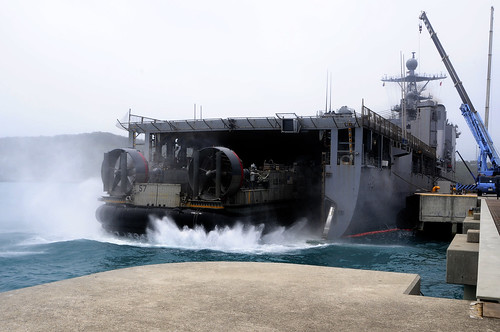 TS11 is a bilateral command post and field training exercise designed to maintain a high level of interoperability between U.S. and Australian forces. The exercise also supports increased flexibility and readiness for maintaining regional security. Approximately 14,000 U.S. and 9,000 Australian Defense Force (ADF) personnel are expected to participate. TS11 is the largest joint military exercise undertaken by the ADF.

Germantown Commanding Officer Cdr. A. D. Hull said he expects the crew to work superbly together with the MEU during the exercise.

“I am looking forward to conducting another deployment with the 31st MEU,” he said. “This will be my fifth time sailing with the Marines in the last 18 months. Each time the ARG/MEU team has worked well together to complete exercises and real world operations.”

"The 31st MEU looks forward to the partnership with Australia and their military forces,” he said. “This exercise increases our readiness and advances regional security in the Pacific. We look forward to validating our combat readiness and interoperability as part of a combined joint task force.”

“We will also be the primary ship coordinating AAV operations,” he said.

This is the fourth Talisman Saber exercise since 2005. These exercises provide a valuable opportunity for the U.S. and other nations to work together during wartime and peacetime operations.

This type of training proved to be effective recently when units from the Essex ARG provided humanitarian assistance and disaster relief efforts, in conjunction with Japan Maritime Self Defense Forces, to Japan after the Great East Japan Earthquake and ensuring tsunami that struck on March 11.

Capt. Bradley Lee, commodore of Amphibious Squadron 11 said continuing to participate in exercises such as Talisman Saber helps to provide stronger ties between the U.S. and its allies.

“In the past two years, the Essex ARG has conducted five humanitarian assistance and disaster relief missions throughout the Western Pacific, which is why this type of training with our allies is so essential,” he said.