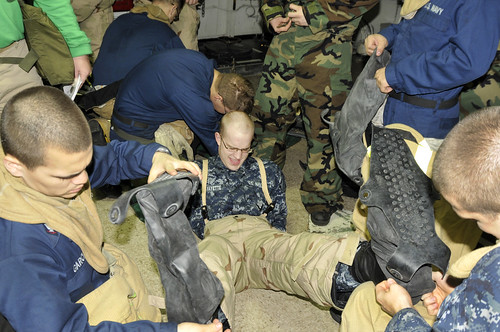 “We need to train and train hard for every possible scenario,” said George Washington’s commanding officer, Capt. David Lausman. “We operate peacefully in international waters but we still need to always be prepared for all different forms of attack.”

The CBR drill is a simulation to practice mission oriented protective posture (MOPP) levels which range from one to four. Level one indicates a threat is possible while at level four, intelligence suggest an attack using chemical, biological or radiological weapons is imminent and the crew is ordered to put on their MOPP gear. The protective postures are also used in the event a ship passes through a chemical cloud or is exposed to fallout.

For Engineman Fireman Aaron Bates from Newport Beach, Calif., a new Sailor aboard George Washington, this evolution was a great reminder of the first time he donned the CBR protective gear.

“[Putting the gear on] brought me back to boot camp,” said Bates “I forgot how constricting it was after putting it on, but it was a good exercise and it was good to refresh myself of the basic fundamentals [of CBR drills].”

MCU-2/P masks protect Sailors against agents meant to harm them in warfare. For the 5,500 Sailors aboard George Washington, this goal is to get the mask on in just eight seconds. For the newest members of the crew, more senior Sailors were on hand to coach and motivate them to meet this requirement.

“They did quite well; everyone pitched in,” said Chief Machinist’s Mate Ralph Galvan from Corpus Christi, Texas. “For the new guys, the more experienced [Sailors] helped orientate them to the drill. I was pretty impressed by everyone out here today.”

“From fighting simulated fires to mock chemical attack, we train day and night to make sure when something happens, we respond correctly and that everyone operates off the same page. That’s the only way to be successful; train, train, train,” said Lausman.