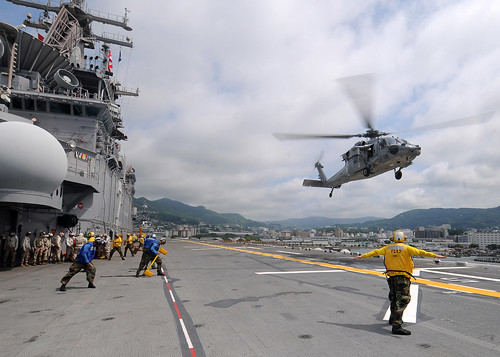 As a regular part of the Essex ARG, the detachment provides more than just search and rescue capabilities to the forward-deployed amphibious assault ship USS Essex (LHD 2).

“The primary mission of HSC 25 is to provide search-and-rescue capability in the air or be readily available to the Essex, the [aviation combat element] and other embarked units,” said Lt. Andrew McDonald, HSC 25 operations officer. “We are capable of providing logistics support such as [vertical replenishment], passenger transfer and we have the capability of loading on Hellfire [missiles] to provide for the ship's defense.”

Homeported in Guam, HSC 25 trains with special operations units and is currently working with the Marines of 31st Marine Expeditionary Unit (MEU), who are also embarking aboard Essex for its current patrol. Together, they practice visit, board, search and seizures (VBSS) and reconnaissance and strike missions.

The detachment flies two MH-60S Seahawk helicopters. Until recently, the helicopter’s only capabilities consisted of transporting cargo and personnel and performing search and rescue missions with limited defensive capabilities. Now they are capable to work in an offensive strike capacity and also as a force protection asset.

Link 16 is an important part of the squadron’s mission because it allows them to transmit and receive real-time information from any ship or aircraft in the fleet, which greatly increases pilot's awareness of the aircraft's surroundings and making them an integral part of any fleet protection operation.

"The MH-60S on board Essex can use forward looking infrared sensors to search for surface contacts ahead of the ARG and provide that information back to the PHIBRON,” said Capt. Bradley Lee, commodore of Amphibious Squadron Eleven. “Additionally, Detachment 6’s Hellfire missiles and guns enable them to conduct surface warfare missions and assist the ARG/MEU team in counter piracy and boarding, search and seizure missions on the high seas and in the littorals."

During Talisman Sabre 2011, the Sailors of HSC 25 expect to have the opportunity to increase their proficiency across a variety of skill sets, including working with other air assets of the ARG and providing close air support for the MEU.

Talisman Sabre 2011 is a biennial, joint sponsored exercise by U.S. Pacific Command and Australian Defense Force (ADF) Joint Operations Command. The exercise is conducted to improve bilateral operations between the U.S. and Australia.