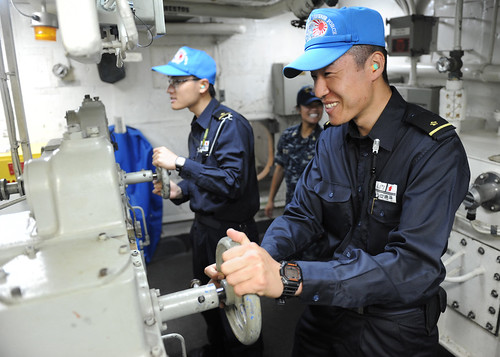 The evolution required the ships to line up in diamond formation and perform various evasive maneuvers, flight operations and mock underway replenishments with the Yukon.

"It was a fantastic opportunity working with the Japan Maritime Self-Defense Force," said Cmdr. Darren Glaser, commanding officer of the McClusky. "Through the many day and night evolutions of the exercise, the crew was able to share the training and experience alongside of the Japanese crew, to better prepare for future maritime missions. McClusky looks forward to more exercises to help strengthen our ties with the Japanese. I look forward to conducting future exercises."

During the exercise, ships from both nations took part in an officer exchange program in order to get a better understanding of how each navy operates.

The McClusky hosted two JMSDF junior officers from the Mineyuki and the Asagiri.

Ens. Shohei Yamaguchi, assigned to the Asagiri, said it was his first experience on an American ship and was impressed with what he saw.

"I've never experienced this type of ship and it was interesting to see the differences between (U.S. Navy) and (JMSDF)," Yamaguchi said. "In (the) U.S. there are lots of back up systems and everyone is well educated in case of an emergency."

Yamaguchi also stressed the importance of PASSEX and the U.S. – Japan alliance.

"In the future we will work together in other exercises," he said. "If we don't know what's going on in the U.S. Navy then we can't act together. This training is good experience for co-operational training with the United States."