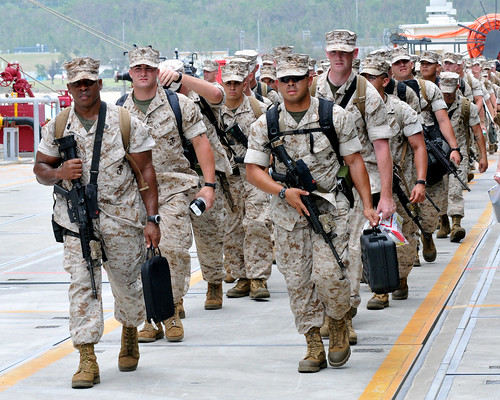 Talisman Sabre 2011 is a biennial training activity aimed at improving and validating the Australian Defense Force and United States combat readiness and interoperability as a combined joint task force.

“The purpose of the MEU embarking aboard Essex is to bring all the assets required to conduct amphibious raids, assaults, humanitarian assistance, noncombatant evacuation operations and tactical exercises during the deployment,” said Gunnery Sgt. Enrique Perez, Amphibious Squadron 11 combat cargo assistant. “We come prepared with more than just what is needed for the U.S.-Australian exercise, we plan for real world contingencies as well.”

Given a compressed time span and newly trained junior Marines, the combat cargo departments of USS Essex (LHD 2) and USS Germantown (LSD 42) moved more than 110 vehicles and 320 pieces of cargo aboard the two ships. Additionally, they helped load elements of the battalion landing team, the ground combat element, aviation combat element and the combat logistics battalion.

To prepare for Talisman Sabre, the MEU has also been making preparations since last year for an Australian government quarantine inspection on all of its aircraft, vehicles and equipment.

The Australian Quarantine and Inspection Service (AQIS) is the Australian government agency responsible for enforcing Australian quarantine laws. The Essex ARG and 31st MEU will coordinate with AQIS to ensure the safety of all ARG and MEU assets, Australian exercise participants and Australian citizens.

Lt. Col. William Arick, commanding officer of Combat Logistics Battalion 31, said the inspection is the Australian government’s way of ensuring that the country is not contaminated with a plant or animal that is not native and does not have any natural predators.

“To ensure we were able to clean and prepare our equipment to stringent agricultural standards for Australia, Marines across the MEU had to disassemble our vehicles and equipment,” said Arick. “We cleaned every piece individually, and spent countless hours pressure washing the vehicles from top to bottom. We worked hand-in-hand with Australian inspectors to ensure every item was clean and without any dirt or other contaminants.”

Talisman Sabre 2011 will give the Essex ARG Sailors and 31st MEU Marines the opportunity to integrate during operations in a combined and joint environment, working alongside their Australian counterparts.

For many of the Sailors aboard Essex, it is their first ship deployment and they haven’t had the opportunity to work with Marines in their career.

“This is my fourth deployment where we have had to integrate with Marines in our shop,” said Intelligence Specialist 2nd Class (SW) Katherine Zehner, from Amphibious Squadron Eleven who serves in the Joint Intelligence Center as a fleet intelligence watch officer. “So far, we get along really well in our shop and we our coordinating together on certain missions for Talisman Sabre.”