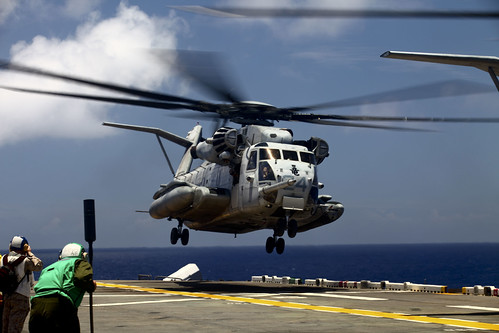 The fly-on of the remaining 12 aircraft from Marine Medium Helicopter Squadron (HMM) 265 marks the final stage of the onload of the entire 31st MEU by the Essex Amphibious Ready Group.

Essex, together with the amphibious dock landing ship USS Germantown (LSD 42), will proceed with embarked MEU assets to participate in the bilateral exercise Talisman Sabre 2011 (TS11).

"The Marines have a senior non-commissioned officer on board to coordinate with us so they get what they need," said Lt. Scott Purcell, Essex' aircraft handling officer. "There is constant communication between the two of us. Our operational purpose is to work together and to make sure the Marines are able to execute their mission effectively. We run flight operations constantly to ensure everyone is up to speed.”

The ACE brings an extensive arsenal of attack, medium and heavy lift helicopters including AH-1Z Super Cobras, UH-1N Hueys, CH-53E Sea Stallions and CH-46E Sea Knights, as well as AV-8B Harrier jet aircraft. These aviation assets will be used to work closely with the Australian Defense Force (ADF) to perform a variety of missions during TS11.

"We’ve been participating in joint training exercises with the Air Force, like Emerald Warrior, which helps us provide tactical and operational joint mission requirements,” said Marine Capt. Srivatsan Santhanam, a pilot with Marine Attack Squadron 214. "We’ve been practicing delivering close air support so we could be more proficient when we enter the Talisman Sabre exercise."

As the U.S. Navy's only permanently forward deployed amphibious assault ship, Essex regularly works with the MEU to conduct exercises and operations in the Western Pacific region. For Aviation Boatswain's Mate 2nd Class Manuel Arias, of Essex air department, the ACE fly on represented a chance to again work with his Marine brethren at sea.

"It was exciting to get back to work flying them on to the Essex,” Aria said. "We all were a little anxious due to the weather, we weren’t sure if it was going to hold. It’s nice to have them back aboard so we can do our job and be working together again."

For many of the ACE pilots, this was their first experience landing aboard Essex at sea.

"This was my first time flying on the Essex, but it went really well," said 1st Lt. Nolan Tankersley, a CH-46 pilot with Marine Medium Helicopter Squadron 265. "It went exactly how we had discussed it in the brief. It was quick and efficient. The call signs are different than we usually use, but we were briefed on that, and the crew on the flight deck did and excellent job."

During TS11, the Essex ARG and 31st MEU expect to conduct operations in a combined and joint environment to increase their war-fighting and humanitarian assistance capabilities with their Australian allies. The exercise is held biennially and is a joint sponsored by the U.S. Pacific Command and ADF Joint Operations Command.

The 31st MEU is the only permanently forward-deployed MEU, maintaining a presence in the Pacific Ocean at all times as part of the III Marine Expeditionary Force, and is based out of Camp Hansen, Okinawa, Japan.

Essex is commanded by Capt. David Fluker and is the lead ship of the only forward-deployed U.S. Expeditionary Strike Group and serves as the flagship for CTF 76, the Navy's forward-deployed amphibious force commander. Task Force 76 is headquartered at White Beach Naval Facility, Okinawa, Japan, with a detachment in Sasebo, Japan.