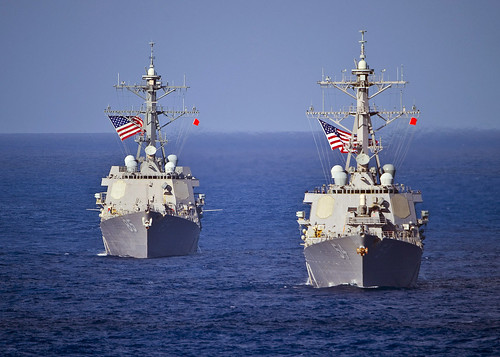 During their visit, Fitzgerald and McCampbell Sailors will get the opportunity to visit the city and interact with the people of Sydney and make a difference in the life of local Australians by doing community service projects.

“Right now we have two community service projects scheduled for just the Fitzgerald alone,” said Lt. Daniel E. Clark, Destroyer Squadron 15 Chaplain. “The first project is going to take place at the Children’s Hospital Randwick and the other project is volunteering at the Cancer Council. Both of these projects Sailors will lend a helping hand with fellow volunteers from the local community.”

The visit to Australia will be first for many of the Sailors who are planning to make the most of the port visit.

“I have a lot planned for Australia already,” said Engineman Fireman Nick Clark, assigned to USS Fitzgerald’s engineering department. “The first thing I’m going to do on liberty is go deep-sea diving with a few of my shipmates and then I’m going to enjoy some music at the famous Sydney Opera House.”

Outside of self-guided tours and visiting landmarks, Fitzgerald’s Morale Welfare and Recreation program is helping Sailors to maximize their liberty opportunities.

“The crew is pretty excited, we have a lot of exciting prospects for them,” said Chief Fire Controlman Manuel Badiola, Fitzgerald’s recreation service officer. “We’ve got everything from diving with sharks, outdoor trips to the Three Sisters rock formation to five star hotel packages for them to pick and choose from.”

Fitzgerald and McCampbell are assigned to Destroyer Squadron 15 and forward-deployed to Commander Fleet Activities Yokosuka, Japan.