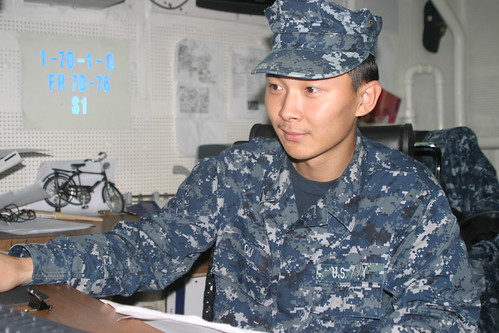 HONG KONG - USS Guardian (MCM 5) arrived in Hong Kong July 3, 2011, and for one Guardian Sailor, it is an opportunity to return home.

Logistics Specialist Seaman Bo Qu is a native of the northeastern province of Liao Ning and a citizen of the People’s Republic of China. Qu left China with his parents for New York City in 2006 with the dream of becoming American citizens. He quickly found work at a restaurant and a real estate agency but ultimately decided to join the Navy in 2008 to help with his quest for citizenship. Qu returned to China once in 2008, when on leave following basic training.

“It’s very exciting that we were scheduled to go to Hong Kong. I’m very happy to have the chance to return to China,” said Qu.

Qu received orders to Guardian, forward deployed in Sasebo, Japan, after completing A school. He will continue to support the command when it departs Hong Kong, and upon returning to Sasebo, he plans to complete the final interview to officially become an American citizen.

Regarding his citizenship status, Qu said, “It’s great that the Navy has given me a chance to become a U.S. citizen. I have been working toward it for a long time, and I cannot wait to finish the process when we get back to Sasebo.”

Guardian will return to Sasebo at the conclusion of its scheduled patrol of the 7th Fleet area of responsibility.