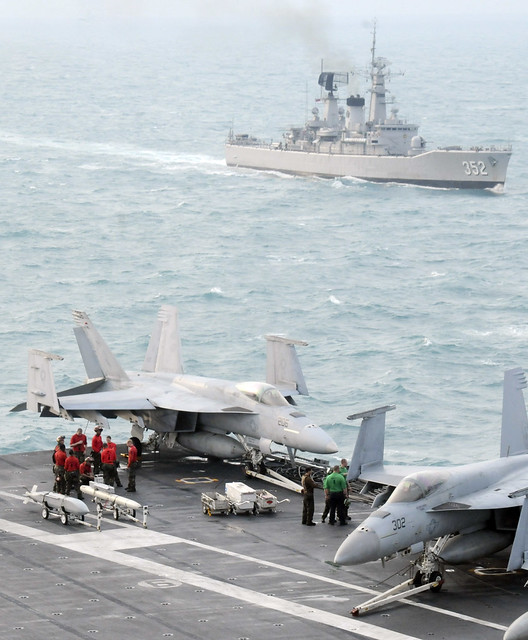 “There is a lot that can go wrong during this evolution. The narrowest point in the straits is just two miles wide and the water is only 18 meters deep,” said Cmdr. Wes McCall, George Washington’s Navigator. “If the ship keel was sitting on the sea floor right now, the mast would be sticking out of the waters, it’s that shallow.”

To assist George Washington, ships from the Australian and Indonesian navies escorted the carrier through the tricky waterway. But the complications weren’t just measured in width and depth. The Sunda Strait, which separates Java from Sumatra, is busy with hundreds of smaller commercial ships moving commerce around the globe.

“The trickiest part is contact avoidance, making sure that we all get through here safely. That’s the only thing on my mind right now,” said McCall.

To mitigate that danger, George Washington’s lookouts were out in full force, armed with binoculars and sound powered phones to instantly report any hazards.

“We had our work cut out for us today,” said Chief Quartermaster (SW/EXW) Jarrod Collins of George Washington’s Navigation department. “For transits like this, it sometimes takes a couple of days to prepare; sometimes a couple of weeks. We research the area we’re traveling through, make sure we are aware of the restrictions and that we are adhering to them.”

While it is easy to be swept away by the beauty of the clear blue water and passing islands, the crew of George Washington is reminded over the 1MC by the ship’s Chaplain that the Sunda Strait is also a graveyard for U.S. and allied Sailors from World War II. In 1942, the cruiser USS Houston (CA 30) and HMAS Perth (D 29) were sunk in the Sunda Strait by Imperial Japanese forces.

“All the waters of the 7th Fleet Area of Responsibility are steeped in history,” said George Washington’s commanding officer, Captain David Lausman. “Our crew gains valuable insight, professionalism and understanding in all waters that we navigate.”

The average age of the crew aboard George Washington is just 26 years old. To successfully navigate a massive 1,092 foot long carrier for nearly 12 hours through a busy and tricky waterway is a credit to the skill of these young Sailors.

“We have some young quartermasters aboard, as well as Sailors who have only been doing the job for a few months. To see them navigating these waters is very impressive,” said McCall. “These guys are the best that we have and I’m very proud of them.”