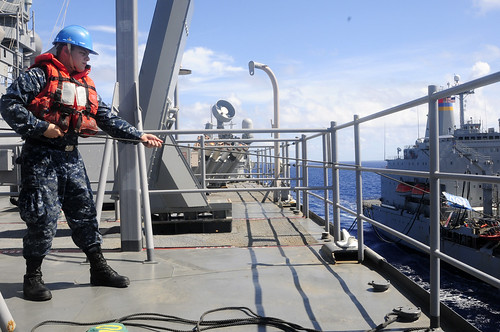 The amphibious dock landing ship USS Germantown (LSD 42) and CTF 76 are elements of the Essex Amphibious Ready Group (ARG) that will be participating in the bilateral exercise.

“At the task force level, our overall goal is to improve U.S and Australian combat readiness,” said Operations Specialist 1st Class Noland Canete, the task scheduling supervisor for TS11. “Not only are we continuing to concentrate on our combined war fighting expertise, but just as important, we are reinforcing the U.S.-Australian relationship.”

Talisman Sabre is a joint sponsored exercise by the U.S. Pacific Command and ADF Joint Operations Command. The exercise happens every two years. U.S. and Australian forces will conduct various land, sea and air operations around the Australian coast, while also practicing their ability to conduct joint humanitarian assistance and disaster relief operations.

The Talisman Sabre exercise is designed to train both U.S. forces and the ADF to act as a combined task force with more than 14,000 U.S. and 8,500 Australian personnel participating.

Canete said CTF 76’s goal for TS11 is to promote the U.S. and ADF organizations' ability to work together seamlessly.

TS11 will focus on contingency response drills that will enhance the U.S. and Australian capabilities in dealing with foreign and domestic threats.

“In today’s broad spectrum of warfare, the expeditionary component is key to completing the objectives of our maritime component commander,” said Thompson. “For this exercise in particular, it’s essential that we participate, because it demonstrates the alliance between the U.S. and Australia, and our other coalition partners.”