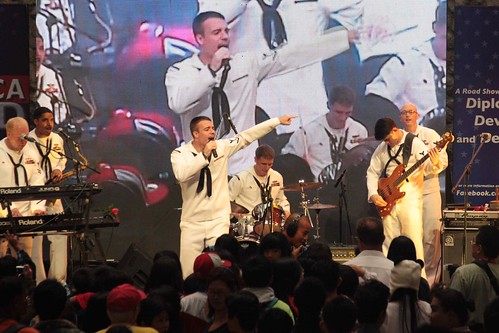 "America in 3D" is a traveling road show in diplomacy, development, and defense. The event included musical performances, free food sampling, a cooking demonstration, information about visas, and studying in the United States. "Orient Express" kicked off the event with an hour of American Music including "Hotel California" by the Eagles and Taio Cruz's hit "Dynamite."

"I really enjoyed America in 3D, the audiences were amazing and very responsive. The staff was great and very supportive,” said Musician 3rd Class Gabriel Brown. “Baguio was an amazing city and I really enjoyed sharing part of America with everyone in the Philippines.”

The band played for an audience of 200,000 people over the three day weekend giving them a first-hand look at American music which included classic country, hip-hop and rhythm and blues.

The musicians also conducted a clinic discussing different styles of music and individual instrument demonstrations. The highlight of the clinic was when the band invited local musicians to the stage for a jam session and performed a special encore of American Top 40 music after the clinic.

"The people here were great and I loved how they sang along with most of our songs. There was a lot of great musical talent at the clinic and we really enjoyed getting the opportunity to share this experience with them," said Musician 1st Class Christopher Sams.

To close out the event, Orient Express performed a set of American country music.

"You don't always get to perform country music in Southeast Asia. The audience was up and dancing to Boot Scootin' Boogie. They loved it" said Brown.

The band also visited three universities and the Philippine Military Academy to facilitate clinics in technique and musical performance.

The event was broadcast live on Ustream.com through the U.S. Embassy Manila's Facebook page and is scheduled to visit cities in the Philippines throughout 2011 and 2012.