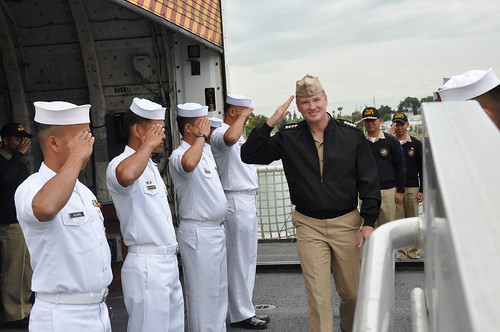 In this June 3, 2011 file photos, Adm. Patrick Walsh, commander of U.S. Pacific Fleet, is greeted by sideboys as he arrives for a visit aboard Philippine Navy ship BRP Gregorio del Pilar (PF 15) in Alameda, Calif. The former Hamilton-class cutter was recently transferred to the Philippine Navy from the U.S. Coast Guard. The new crew is receiving training in Alameda before transiting the ship to the Philippines. (U.S. Coast Guard photo by Petty Officer 3rd Class Caleb Critchfield)

Deputy Consul General Paul Cortes, of the Philippine Consulate in Honolulu; Capt. Jeffrey James, commander of Joint Base-Pearl Harbor-Hickam; and Capt. William Johnson, commanding officer of USS Lake Erie (CG 70), will greet the ship. Members of the Filipino community who have base access are welcome to attend the arrival.

During the port visit, Gregorio del Pilar will take on supplies and fuel, hold a reception hosted by the Philippine Consulate General in Honolulu and the Philippine Celebrations Coordinating Committee of Hawaii (PCCCH), and visit the USS Arizona Memorial. A social media "Tweet Up" is being planned during the ship's visit. A Catholic Mass will be conducted prior to their departure.

Prior to taking command of the ship, 74 members underwent intensive hands-on training on board the USCGC Boutwell, the sister ship of the USCGC Hamilton, for two months, traveling to Colombia, Ecuador and El Salvador, during which time the ship's mission included the interdiction of drug smugglers. The success of the training and transition is an indication of the robust Philippine-U.S. partnership and serves as an expression of U.S. commitment to help the Philippines protect its maritime domain.