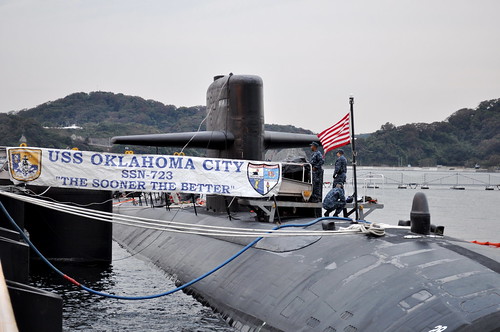 With a crew of approximately 140, Oklahoma City will conduct a multitude of missions and showcase the latest capabilities of the submarine fleet.

"Oklahoma City is the newest addition to the Forward Deployed Naval Forces in the Western Pacific," said Cmdr. Andy Peterson, Oklahoma City's commanding officer. "Our crew is motivated and operationally ready, serving our nation at the tip of the spear. We are extremely honored for this opportunity to visit our esteemed partners and allies in Japan."

Measuring more than 360 feet long and weighing more that 6,135 tons when submerged, Oklahoma City is one of the fastest and stealthiest submarines in the world. This submarine recently completed a shipyard availability making her one of the most modernized and capable submerged warships on the waterfront. She is able to support a multitude of missions, including: anti-submarine warfare, anti-surface ship warfare, strike, intelligence, surveillance and reconnaissance, irregular warfare and mine warfare.

"This year, the crew of Oklahoma City have trained and worked very hard to be here in Japan," said Senior Chief Logistics Specialist Jason Dinkel, chief of the boat. "They took this ship out of a two-year shipyard period, moved their families 9,000 miles...from Portsmouth, N.H. to their new homes in Agana, Guam. Our Sailors have been looking forward to some well-deserved liberty in Japan, and I know they cannot wait to experience the traditions and customs that the Japanese culture has to offer."

For many crew members, this is their first time visiting Japan.

"I have never been to Japan before, but I've heard so many amazing things about Yokosuka and the surrounding cities and countryside," said Fire Control Technician 3rd class Laban Duplichan. "During our visit, my friends and I intend to visit popular spots in Tokyo, including Shibuya, and experience the fast-paced atmosphere and renowned nightlife. I also hope to visit some of the local markets and sample traditional Japanese cuisine. I know this will be an experience of a lifetime!"

Oklahoma City was previously assigned to Submarine Squadron Eight, where she became the first U.S. Navy submarine to complete a successful deployment using an all-electronic navigation system. After an engineering overhaul and modernization in Portsmouth Naval Shipyard, she conducted an inter-fleet transfer to Squadron 15 in Guam.