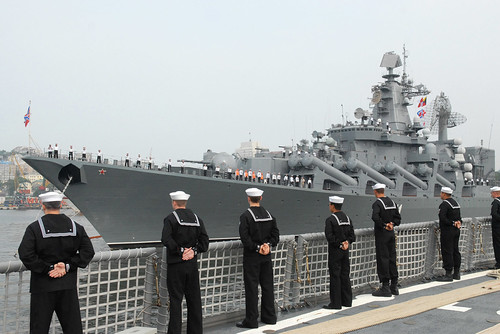 EVERETT, Wash. - The guided-missile frigate USS Ford (FFG 54) is scheduled to return to Everett Nov. 17, after a six-month deployment to the Western Pacific.

Ford departed Everett in May, 2011. During deployment, the ship participated in the multi-national Cooperation Afloat Readiness and Training (CARAT) exercise. CARAT training scenarios include coastal patrol, mine countermeasures, amphibious assault, and maritime patrol and interdiction, and are primarily conducted to enhance regional cooperation and promote understanding between participating military forces.

"I was pleased that the crew had an opportunity to be hosted in India," said Cmdr. Donald Foss, commanding officer of Ford. "The interaction with the Indian people, culture, and Indian Navy has been more than rewarding. I sincerely hope I and the crew of USS Ford are provided this opportunity again someday in the future."

Ford is assigned to Destroyer Squadron 9 and is equipped to provide defense in-depth against air, surface and sub-surface threats for military and merchant shipping.

Ford helps provide deterrence, promote peace and security, preserve freedom of the sea and humanitarian/disaster response within Third Fleet's 50-million square mile area of responsibility in the Eastern Pacific, as well as supporting the Navy's Maritime Strategy when forward deployed.